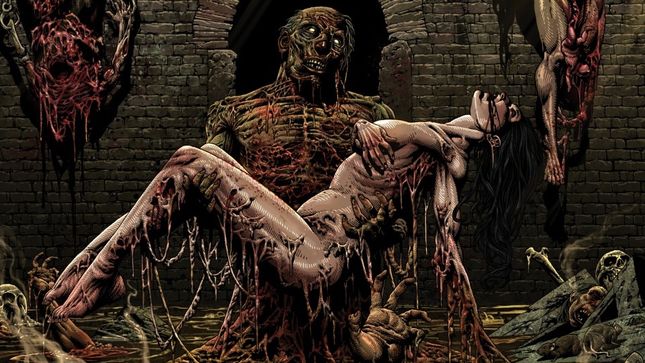 British death metal band, Ingested, have announced the reissue of their debut EP, Stinking Cesspool Of Liquefied Human Remnants, fully remixed and remastered. Pre-save here, and pre-order the 10" with CD inside over at IndieMerchstore, Impericon.de, and all reputable physical stores.

The band are also streaming the lead track from the record, "Butchered & Devoured". Listen below.

Deleted before the release of debut album, Surpassing The Boundaries Of Human Suffering, the EP features the original recordings of songs which later made it to the full-length. Recorded just five months after the band formed in May 2006, this EP release marks the band's 15 year anniversary.

Drummer Lyn Jeffs commented: "To celebrate our 15 year anniversary as a band we're stoked to announce we are releasing a completely remixed and remastered version of our sought after 2006 EP, Stinking Cesspool Of Liquefied Human Remnants, which originally featured on our debut split CD release North-West Slam Fest. This is a must have for fans who wants a piece of Ingested history and is a great way for newer listeners to delve into our roots and experience our early sound."

With a huge-sounding modern mix and master, Stinking Cesspool Of Liquefied Human Remnants is great snapshot into the band’s early sound for a seasoned fan, as well as a great intro to the band’s roots for a new listener. Recorded and engineered in October 2006 by Simon “Ding” Archer at 6dB Studios, Manchester, England, it was remixed, remastered and edited by Nico Beninato at Kimera Recordings, Palma de Mallorca, Spain.