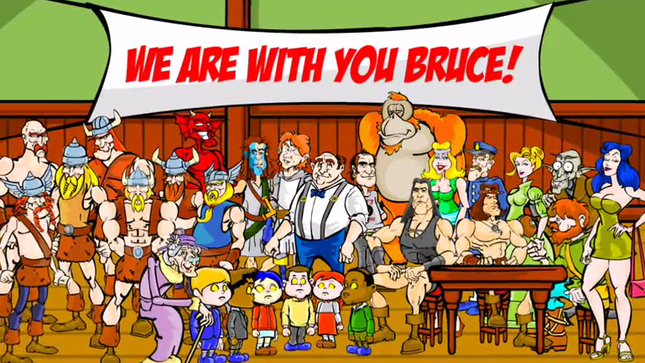 The metal world was shocked recently to learn that Iron Maiden frontman Bruce Dickinson is recovering from tongue cancer, a condition that was kept under wraps. Brazil-based animator Val Andrade, who made a splash several years ago with his unique cartoons based on Iron Maiden's catalogue of songs, contacted BraveWords directly with a tribute to Dickinson (found below), stating "this was the simplest way I found to support Bruce Dickinson in this difficult time."

The clip is Andrade's best work to date. Maiden fans: do yourselves a favour and watch the clip from beginning to end.

“Bruce has asked me to thank everyone for their tremendous support and kind wishes. He has been extremely touched and encouraged by the genuine and affectionate response from our global family of Maiden fans.

Radiology is cumulative and continues to build in the body for around three weeks after treatment, so even though Bruce’s seven week course is completed, he’s had a long period of considerable pain and discomfort. He is happily now starting to recuperate and the pain will continue to abate and the swelling to reduce for the next couple of months at which time he will be able take an MRI scan. It is not until then that we will have full confirmation that the cancer has been completely destroyed. However prognosis continues to be extremely good and everyone is optimistic for a full recovery. Following the scan, we will officially update you on this website at the appropriate time, probably in late May.

After that, it will take a few more months for Bruce to get back to full fitness. Naturally the rest of the band are totally supportive and Maiden’s plans will be determined by Bruce’s progress.

Please continue your positive thoughts. They are very much appreciated.”

Speaking with Florida’s 98.7 The Gater recently, Iron Maiden drummer Nicko McBrain discussed the upcoming HomeSafe Benefit that he's hosting on Saturday, March 7th, at the Hard Rock Hotel and Casino. He also gave an update on Bruce Dickinson's recovery from tongue cancer and talked about how that has affected Iron Maiden:

“So, just to let everybody know, from what we can gather, he's really in great hands, and he's doing extremely well. So we expect him to have a full recovery in the next couple of months, and then, watch this space, really. We have made an album. The album was ready to go this year… and it still is. When I was was, we were planning on going out and doing some work around the album, which now… we're all just holding on, and once Bruce is up and running, hopefully in the next couple of months, we'll… You never know when this might happen. You just never know, do you?"

Read more and see more video at this location.