IRON MAIDEN Drummer NICKO McBRAIN On No Longer Drinking Alcohol - “I Got Myself Match-Fit, So To Speak” 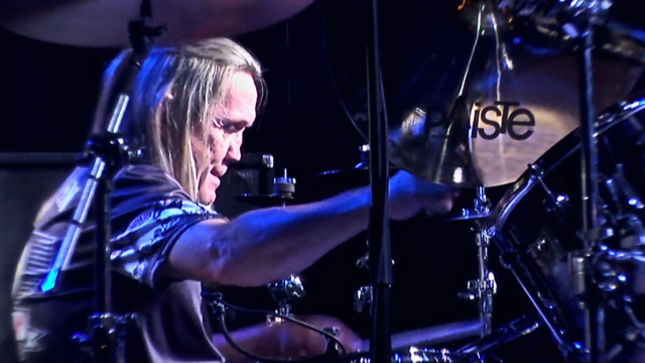 Ahead of their dates down under in May, Iron Maiden drummer Nicko McBrain spoke with Australia’s MusicFeeds about the upcoming shows, the band’s new album The Book Of Souls, and more. A couple of excerpts follow:

MusicFeeds: What is the key to keeping up stamina as a performer, for you? Most of the band is in their 60s now, and you’ve been playing at fairly high speeds across quite a big drum-kit for over 30 years. An Iron Maiden show is a big enough task in and of itself, but one can only imagine the gruelling nature of doing it almost every single night…

Nick McBrain: “The answer to that is that I stopped drinking. May 25th last year, I stopped. My brother had a clean bill of health, and I realized that I had a massive world tour to come up. That influenced my decision to get off the grog for a month. One month lead to two, and then after that I decided to look after myself a lot more. I focused on setting aside an hour to play drums every single day. I would rehearse the six new songs that we would be playing on the tour, and I would play them through twice. It was almost like playing half a gig. “The Red And The Black” is 13 minutes – playing it through twice is nearly half an hour of playing right there! I got myself match-fit, so to speak. I started changing my diet a bit, and I lost weight. That’s how I’m coping right now.”

MF: Australia is up next on The Book Of Souls tour, as well as New Zealand. It will be the first time the band has been out here since headlining the 2011 Soundwave festival, and your first headlining tour since the Somewhere Back In Time tour in 2008. Of course, Maiden has been coming to Australia for years – do you have any special stories or vivid memories from early on in the band’s visits here?

NM: “Cor blimey, mate, that was back in my drinking days! [laughs] I do remember when I got to Melbourne, and the first thing that I did was get in 18 holes at Royal Melbourne Golf Course. That was special for me. Not only was I so excited about playing these shows with the band, but I was getting to experience my second passion – which is golf – on the other side of the world. There was one tour we did, back in the early 90s, and I had a drum-kit that I trashed. We were doing shows in Sydney, Melbourne, Wollongong… am I saying that right? Wool-en-gong?”

Read the full interview at MusicFeeds.com.au.

Iron Maiden’s live itinerary can be found at this location.