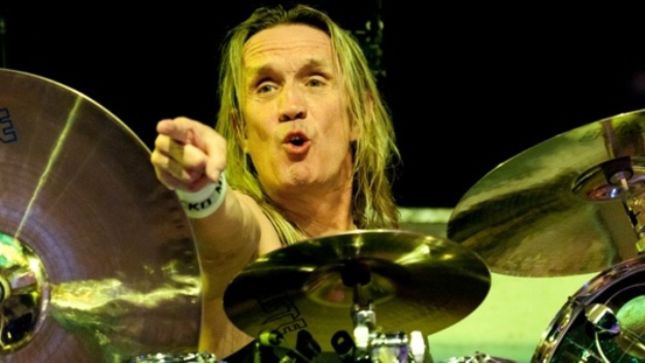 Below is an outtake from a Metal Express Radio interview with Iron Maiden drummer Nicko McBrain in 2000 while he was rehearsing backstage in Oslo during the Brave New World tour. Nicko talks about warming up before the shows, picking set lists, and the man inside Eddie.

Following Iron Maiden’s record-breaking sell-out of Santiago’s 63,000 capacity Estadio Nacional, a feat unparalleled by any other artist so many months in advance, the band has now confirmed a second night in Chile - their first ever show at the Movistar Arena - on Monday October 14, making them the first Anglo artist to play both venues within the same visit.

Promoter, Phil Rodriguez Founder & CEO of MOVE Concerts comments: “With every ticket snapped up for the Estadio Nacional show on October 15th and literally thousands of fans still clamouring to see Maiden in Chile, I asked the band if they’d consider doing one final date and they kindly agreed. This situation is unprecedented for us. It’s an amazing achievement anyway to sell out the Stadium – which incidentally Maiden have now done for the fourth successive time - but quite another to sell out almost seven months in advance of the show and to witness the astonishing demand we’ve had from fans for this tour. Having seen the Legacy of The Beast show last year in Europe, I completely understand why fans are frantic to get their hands on a ticket, it is simply jaw-dropping! I’m absolutely delighted we’ve been able to secure the Movistar Arena to ensure that even more fans now have the opportunity to catch the band on their Legacy Tour this year.” 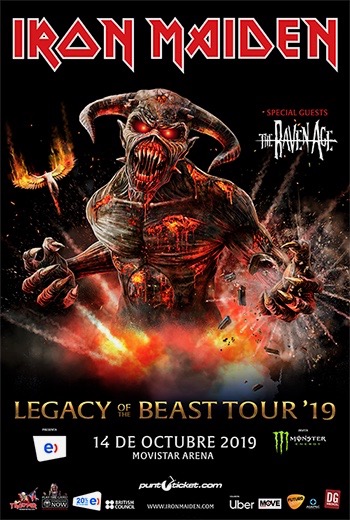 Iron Maiden’s special relationship with Chile started decades ago. They have played more concerts in Santiago than any other rock Artist, all of them sold-out. Their chart-topping DVD and CD En Vivo was recorded and filmed at a sold out Estadio Nactional in 2011, and two years later when they returned for another sell-out show at the same venue, during their Maiden England Tour, the Chilean national newspaper La Tercera pronounced it “the largest audience by a British band, ever”. Things have changed dramatically since the band were first turned away from Chile in 1992 when the Catholic Church declared the band and mascot Eddie a bad influence and barred them from playing in the country. However the turn of the century brought with it a turn of fortune and Maiden has taken every tour since, to their fans in Chile.

The band’s triumphant first leg of the Legacy Of The Beast tour opened in Europe last year to outstanding critical acclaim, not just by the 750,000+ fans who came to see the show but right across national press and rock media.

Steve Harris, bassist and founder member says: “We were thrilled when our promoter asked if we could play another show as the Stadium had sold out. The relationship with our fans in Chile has always been a special one. As everyone knows, we love touring everywhere in Latin America, there’s a tangible bond between us on the stage and the passion coming from the audience so its a privilege to be asked to do another show – especially in an arena which is the closest we will have come to our fans in quite a while – it’s going to be a very special couple of nights that’s for sure! We gave a lot of thought to the set list for this Tour as the songs needed to follow the narrative of the changing worlds of the stage show. We feel we ended up with a very strong and well balanced set mixing songs we haven’t played in many years like 'Flight Of Icarus,' 'Sign Of The Cross' and 'The Clansman' with songs we know the fans want to hear like 'The Trooper,' '2 Minutes To Midnight,' 'The Number Of The Beast,' 'Fear Of The Dark,' 'Run To The Hills,' 'Hallowed Be Thy Name' and others, reflecting the journey through the different themes of the show. The whole band is really enjoying this tour and we are really looking forward to seeing everybody again!”

Maiden vocalist Bruce Dickinson adds: “We’re excited to return to Chile and unveil the Legacy Of The Beast Tour to all our friends there! We’re immensely proud of this show and we’ve had great reactions from the many fans who came to see us in Europe last year. The production is based on our mobile game The Legacy Of The Beast which basically takes various incarnations of Eddie into many different Maiden Worlds. This inspired us to put together a stage show to take our fans through unique worlds and experiences set to appropriate songs. It is not that easy designing different Worlds on stage and we put a huge amount of time into this to make it work and the end result we feel is our most spectacular and certainly the most complex show to date. We’ve got all kinds of crazy things going on, including a replica Spitfire plane dominating the stage during 'Aces High,' tons of pyro, a giant Icarus, muskets, claymores and some truly marvelous flame-throwers which I have a hell of a lot of fun with, as you will see! And of course we have Eddie, as you’ve never seen him before, and absolutely loads of other surprises. I’ve had the time of my life playing with all these magnificent props on stage, it’s been fantastic, we can’t wait to bring this show to you!”

Maiden’s 2019 North, South and Central America tour comprises 42 shows in six countries, which, combined with their 2018 European dates means that by the end of this tour, the band will have taken the Legacy Of The Beast show to over one and three quarter of a million fans around the globe.

Support on the 2019 tour comes from The Raven Age.

The Legacy Of The Beast Tour production and set list were inspired by Maiden’s free to play mobile game of the same name which is available on iOS and Android platforms at here.

Both Iron Maiden management and their promoter urge the public to only buy tickets from the authorized agency listed above. For further information visit puntoticket.com and ironmaiden.com.