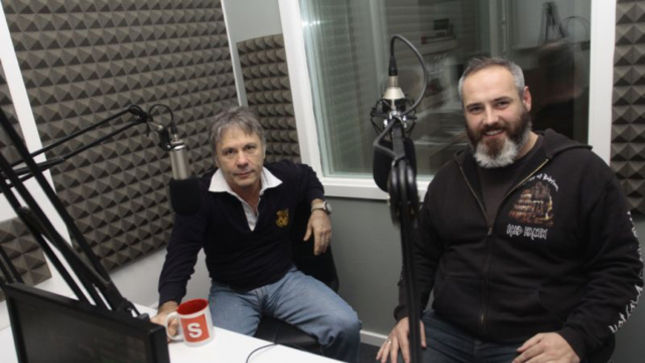 Iron Maiden singer Bruce Dickinson, recently paid a visit to Sarajevo, the capital of Bosnia and Herzegovina, where he came to shoot for an upcoming documentary film, entitled Scream For Me Sarajevo.

Bruce arrived to Sarajevo for the first time in 21 years. During his last visit, the city was under siege, he and his band performed for fans trapped in the city. This time, the reason for his visit was to shoot the upcoming documentary, inspired by he and his band’s wartime visit to Sarajevo.

During his trip, Dickinson visited the newsroom of Radio Sarajevo and portals Radiosarajevo.ba. Bruce gave reporters Emir Saracevic and Dzemal Bijedic and in-depth interview to be broadcast today, Tuesday, December 15th at 9 PM.

You can listen to the program online at RadioSarajevo.ba. Check out a photo gallery at this location.