IRON MAIDEN Guitarist ADRIAN SMITH Looks Back On BRUCE DICKINSON's First Show Following Cancer Recovery - "I Was Actually In Tears; I Was Completely Choked Up" 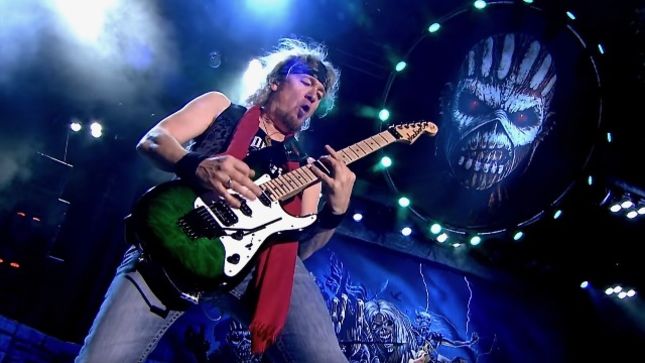 Adrian Smith, Iron Maiden's lead guitarist and self professed Compulsive Angler, has been keeping busy over the past year writing a book about his fishing adventures around the world, including numerous stories about his 30-year career with Iron Maiden, called Monsters Of River And Rock. He recently spoke with Derek Scancarelli at Forbes about his enjoyment of fishing and life with Iron Maiden. An excerpt is available below.

Forbes: Iron Maiden’s singer, Bruce Dickinson, recently survived a battle with throat cancer, announcing he was cancer free in 2015. When you first found out about his diagnosis, were you horrified? Did you think it could mean the end of Iron Maiden?

Smith: "Nothing can prepare you for something like that. It was an incredibly dark time. I suppose my immediate thought was that he’d probably beat it because he’s that kind of person. Plus, the first thing we do is find out the facts of his cancer: what stage is it? That’s very important. We found out it was treatable and in a relatively early stage. Although I think he’d had it when we were doing the album The Final Frontier (2010). I was there when he was doing vocals. I could hear it in his voice sometimes, he didn’t sound quite right. But, we found out it was treatable.

We tried to give him a bit of support, but really, what can you do? He had to go through it. He did and he beat it. It was quite incredible. He’s got such a strength of character. He’s never negative about anything. He’s always a very positive person. 'If I can put my mind to it, I can do anything,' sort of person. And he usually does. But we didn’t know about the band. Who knows about these things? But I thought he’d probably recover and thank God he did."

Forbes: You described the first show of The Book of Souls tour in 2016, when you watched Bruce take stage for the first time after overcoming cancer and recalled getting really emotional. What did that moment feel like?

Smith: "I didn’t expect it at all. That is such a great intro to the show, the way he sings the intro to the song 'If Eternity Should Fail'. When he did it live, the first time, I was actually in tears. I was completely choked up. I don’t know where that came from. But there he was. He finished and we were back on stage. It didn’t happen again. It only happened that once.

To be quite honest with you, I had the same reaction when I saw Maiden after I’d left and I went to Donnington (1992). I was standing at the side of the stage, Steve (Harris) said, 'Come down and see us and get up and play with us.' I thought it was a nice olive branch to keep things cool. But as I was watching them, the same thing happened. I was actually overcome with emotion. I had a couple of whiskeys. Then I got on stage and I was alright."