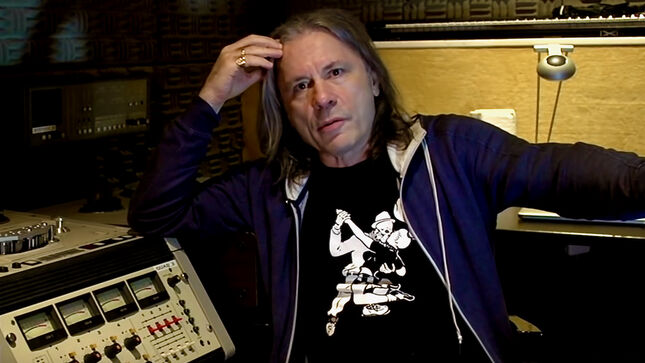 In a new interview with Loudwire, Iron Maiden vocalist Bruce Dickinson reveals that he plans to resume work on his follow up 2005's Tyranny Of Souls album this spring.

Asked if he's had any opportunity in the last couple of years to work with Roy Z and get some solo material going, Bruce responds: "When I get to the end of the one-man show in the end of March, I've got about three weeks cooling my heels somewhere — I might lie down in a darkened room for a couple of days and recover from the tour and then put my singing head on and go and have a chat with Roy.

We've already got a bunch of material - demos and everything - but we need to organize it a bit more properly and be a bit more serious about it. Maybe write a few more tunes and then basically leave it down to Roy. He can go off and start doing backing tracks and things like that.

Obviously, I'm going to be going out on tour with Maiden, but we made Tyranny Of Souls that way. Tyranny Of Souls was done kind of remotely - I wasn't physically present when some of the backing tracks were done, but he sent me the backtracks and I listened to them and, some of them, I wrote the words to the backtracks. Mixing and matching like that sometimes gets great results."

Read more at a href="https://loudwire.com/bruce-dickinson-interview-2022-spoken-word-tour/" target="_blank">Loudwire, and watch the video below: