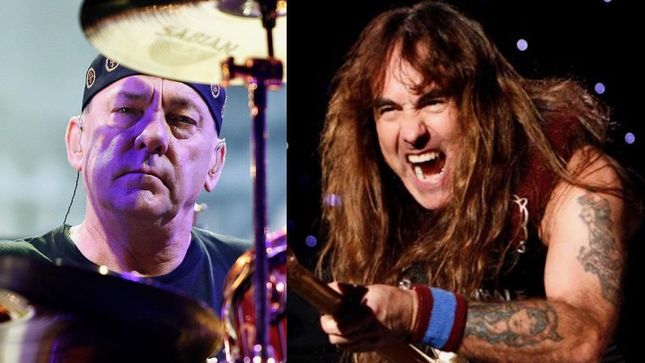 In Martin Popoff's upcoming BraveWords feature on British Lion, the side project of Iron Maiden bassist Steve Harris, he speaks to Harris about late Rush drummer Neil Peart, who passed away on January 7 after a three-year battle with brain cancer (glioblastoma).

“I never met Neil,” answers Steve, asked for his thoughts on the passing of Peart, an icon of progressive metal, as is, really, Steve Harris. “I’ve played tennis with Geddy (Lee) and Alex (Lifeson), because I’m a good friend of Andy Curran from Coney Hatch. He’s worked for many years with Rush, so we end up playing doubles in tennis and stuff. So I’ve met them, and really lovely guys, and good tennis players too. But, you know, I never met Neil. It’s just one of those things. Sometimes, some bands, you kind of meet on the road and at festivals, this, that and the other, but some bands you never cross paths with. And he was one of those people. Like AC/DC, for example - I’ve met Brian Johnson once, but I never really met the rest of the band. And yet the amount of touring that both bands do (laughs) - Maiden and AC/DC - you’d think we’d cross paths somewhere or another, but we haven’t. It’s quite strange. It is what it is. Loads of musicians I’ve met, but that’s just the way it goes.”

“But Neil, well, it’s just awful, really. Very sad. Huge talent, of course. I feel sorry, obviously, for the family, and obviously his band members have been put in a really awkward situation. But yeah, what a fantastic talent and sadly missed.”

Popoff's British Lion feature will be available in full, in the coming days.

British Lion launched their US tour on January 18 in Orlando, Florida. The band also launched a US Tour Diary video series. You can watch the first four segments below:

Upcoming tour dates are listed below.