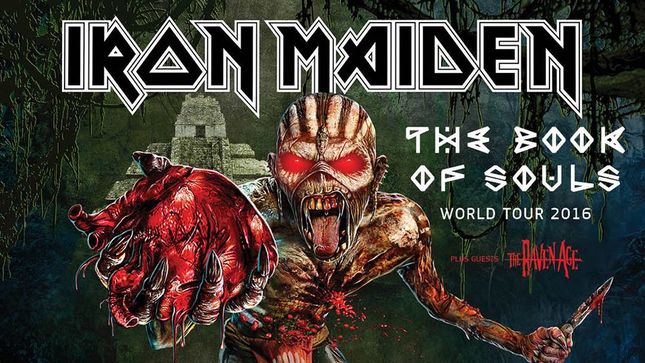 Live Nation has announced that, following the rapid sell out of the Iron Maiden show at the L.A. Forum on April 15th, 2016, they have been able to secure a second night there, on Saturday, April 16th, 2016, before the band fly off to Tokyo on Ed Force One on the following leg of their The Book Of Souls World Tour.

Tickets go on sale to the general public on Saturday, October 17th at 10 AM, PST and can be purchased at Ticketmaster.com.

Due to the band's schedule no other US dates can be added at this time but dates in Canada go on sale on Friday, October 16th for Montreal, Toronto,
Edmonton and Vancouver.

As reported earlier, Iron Maiden has been confirmed to headline the Graspop Metal Meeting on Sunday, June 19th, 2016. The heavy metal legends will be flying in to Dessel on board their 747-400 Jumbo Jet Ed Force One on The Book of Souls World Tour. Tickets go on sale on October 15th. This follows the recent announcement of Black Sabbath as the headliner for the first festival day.

With over 90 million albums sold worldwide since the band’s inception in 1975, Iron Maiden can rightfully be called a heavy metal supergroup. In sold-out stadiums and arenas all over the world, millions of fans scream genre classics such as The Number of the Beast, Fear Of The Dark and The Trooper at the top of their lungs. Every self-respecting metal fan is aware of the impact this British band has had on the heavy metal scene as a whole and with seven Graspop shows to their credit, Iron Maiden’s popularity in Belgium is beyond dispute. The September release of their brand-new album, The Book of Souls, which debuted at #1 in Belgium and over 40 countries around the globe, seemed like the perfect excuse to invite them for the eighth time and they were happy to accept.

Frontman Bruce Dickinson will once again navigate the globe on the flight deck, this time aboard an enormous Boeing 747-400 jumbo jet. The new “Ed Force One” will carry the band, crew, stage production and equipment over 55,000 miles around the world visiting around 35 countries.

Bruce comments: “It’s been some time since our last show and we cannot wait to get back out on tour. Maiden thrive on touring and playing to our fans, it’s what we enjoy the most. We look forward to returning to Graspop, we always enjoy playing here. We haven't decided on the set list as yet and won’t until we start rehearsing but we really look forward to playing a number of new songs live, especially as the recording of The Book of Souls was so much live. However, as it’s been a while since we saw you all, I am sure we will include plenty of older fan favourites too. I think the fans will be delighted by what we have in mind. We are also in the middle of creating the new show and rest assured we are working hard to bring you all something spectacular, something with a lot of heart!!! You certainly deserve it for your patience. We very much look forward to seeing you all at Graspop Metal Meeting next year.”