IRON MAIDEN - Were ADRIAN SMITH And BRUCE DICKINSON Concerned With What STEVE HARRIS Was Thinking When They Joined Forces In The Late '90s? 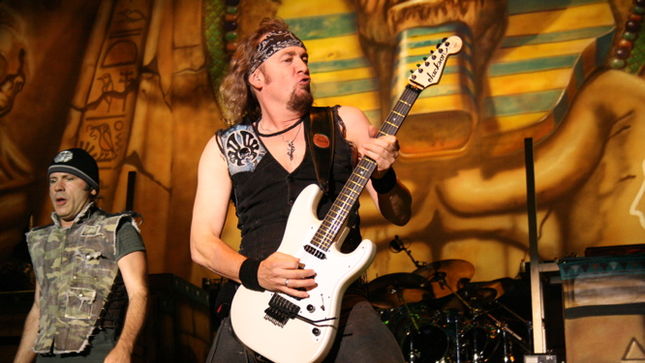 BraveWords recently caught up with Iron Maiden guitarist Adrian Smith, who has released his first book titled, Monsters Of River And Rock, via Virgin Books. The 290-page memoir has some music in it, but its focus is on his love of fishing, something that began as a youth growing up in East London and continues to this day. Focusing on music, Smith decided to leave Iron Maiden prior to the release of No Prayer For The Dying, which interestingly features on one Smith-penned track (with Dickinson called “Hooks In You”). While both still out of Maiden during the Blaze Bayley years, Smith hooked back up with Bruce Dickinson for his 1997 album, Accident Of Birth, soon becoming a full-time member alongside guitarist/producer Roy Z. Along with bassist Eddie Casillas and drummer David Ingraham, the Bruce Dickinson band would tour the world twice in support of Accident Of Birth and the follow-up the year after, The Chemical Wedding.

“Bruce rang me up out of the blue and asked me if I want to join his satellite band,” Smith looks back at the collaboration in an excerpt from the forthcoming BraveWords feature. “He said, ‘Well, I’ll come round and play you what I’m doing with Roy Z’. And he did, he came round and he played demos of what would become Accident of Birth. I loved it straightaway, it was very powerful, very guitar-oriented. I said, ‘Yeah, I’m in. I’ve got a few songs.’ I had a lot of fun for 3-4 years, two tours with Bruce, two studio albums and a live album.”


BraveWords: Were you and Bruce concerned with what was on Steve Harris’ mind at the time?

Smith: “Not really. We did a couple of Iron Maiden songs live but then again we wrote them. We did ‘2 Minutes To Midnight’, ‘Run To The Hills’, ‘Flight Of Icarus’ - songs that Bruce and I wrote. I didn’t see any problem with doing that. We were doing stadiums down in South America and people loved it. It was a great band as well. There’s some stuff from South America on one of those tours that’s on YouTube now, and I still think it stands up and sounds good.”

BraveWords: Roy Z did wonderful with you guys and of course Rob Halford. He is one of my favourite musicians on the planet.

Smith: “He’s a great musician, yeah. He’s taught guitar and he picked up a few things in my playing and commented on them when we started playing together, and he gave me ideas about improving certain aspects of my playing. I think I really improved when I played with him because he’s so good.”