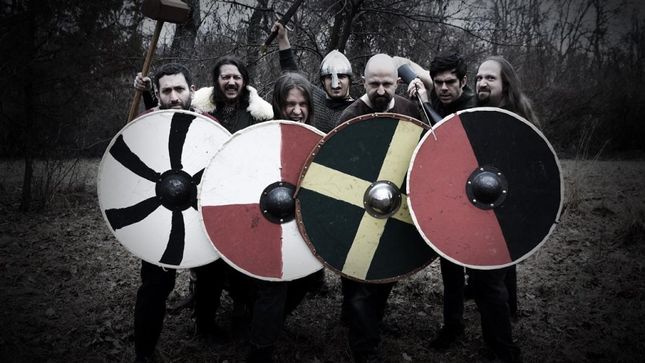 “‘Furor Teutonicus’ is one of the most intense tracks on ‘Shieldbrother,’” says guitarist/vocalist Tim Regan. “It has become a mainstay of our live set because of the energy and ferocity it delivers. The song is topped off by Nick’s lightning-fast violin run at the end, which sounds amazing and is hypnotizing to watch.”

Isenmor sings tales of harrowing battlescapes and historic foes in their gewyrdelic folk metal style: a blend of metal, orchestral, and folk music, combining intricate violin leads and rich vocal harmonies with a strong guitar-driven folk metal base inspired by the stalwarts of the genre including Týr, Ensiferum, and Eluveitie. “Gewyrdelic” is an Old English word that roughly translates to “historical.” The meaning of the term, as well as its etymology, describe Isenmor’s lyrical and thematic focus on the history and legends of the Anglo-Saxon and Germanic peoples.

In line with this historical approach, “Furor Teutonicus” explores Roman characterization of Germanic warriors from the Late Republic and Empire. The track’s title is attributed to a phrase first used by the Roman historian Lucan to describe these warriors in his book Pharsalia.

“While it is fun to explore this characterization as we did in ‘Furor Teutonicus,’ it is important to remember that it is just that, a characterization,” says violinist/vocalist Nicholas Schneider. “The image painted by late Roman authors is not a wholly accurate one, often used for moralizing purposes. Those who have used this image to promote theories of racial characteristics or superiority based on descent from Germanic tribes do so in an attempt to justify their already held views, which are not grounded in reality.”

Shieldbrother delivers tales of glory with the triumphant title track, sorrowful tales of woe such as the mournful “Battle Scarred” and the dirge-like “Mount Badon,” a 17-minute epic entitled “Sigurd’s Song,” the obligatory folk metal drinking song (with an Isenmor twist), “Drink To Glory,” and more tales steeped in the myth and history of the dark ages. The album was self-recorded and mixed, then mastered by the legendary Dan Swanö of Unisound.