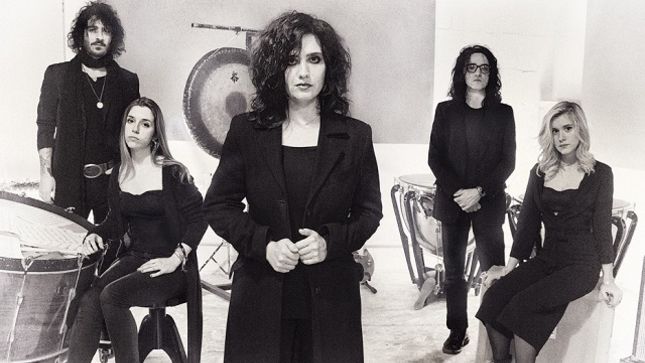 Italian rock noir band Belladonna have just released their most visionary album to date: The Orchestral Album, a selection of ten songs cherry-picked from their catalogue, completely rearranged and recorded with a symphonic orchestra which features many of Ennio Morricone's regular orchestral players,

The Orchestral Album delivers 40 minutes of epic grandeur, spine-tingling beauty and gutsy raw power, a stunning, timeless and very unique album that will doubtlessly conquer the hearts of many music lovers all over the world.

Crowdfunded by the band's large and faithful fan base, this album seamlessly combines Belladonna's dark and passionate tones with Kazakh arranger/conductor Angelina Yershova's luscious and heart-blowing orchestrations to create a deeply emotional journey.

The Roman quintet is not new to orchestral escapades: they have written and recorded a song with legendary British composer Michael Nyman, the strings part of their most recent single "The God Below" is on the Clio Award-winning international TV spot for the blockbuster movie Minions, and an orchestral arrangement composed by their guitarist Dani Macchi is in the soundtrack of Michael Moore's new movie Where To Invade Next.

The Orchestral Album is available on all digital platforms.