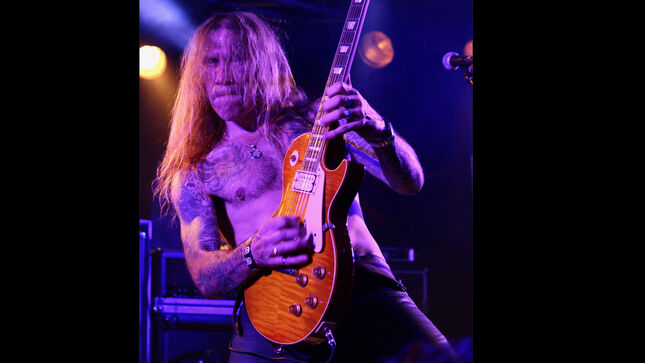 Brothers In Arms is the brainchild of guitarist/composer Jack Frost (Savatage, Seven Witches, Lizzy Borden), who along with several recruited iconic rock brothers, has made it his mission to prove rock music will never die. The guys unified to take a stand against the doubters and cynics who have claimed that it's simply not possible to resurrect this celebrated music in which so many lasting and fond memories were built around. Banding together, Jack & the Brothers forged ahead with one main goal: To make quality music that would both represent and immortalize the days of the sold-out legendary rock venues, to show the world that rock is not just a thing of the past.

What is Brothers In Arms? Who is Brothers In Arms? All of your questions will be answered on Saturday November 13 at 4 PM, EST. Don Jamieson will dig in with Jack Frost (Savatage), Andrew Freeman (Last In Line), Keith St John (Kingdom Come), Charlie Calv (Angel), Carl Wilcox (Diamond Head), Alex Jansen (Hardline), Todd Poole (Roxy Blue), Nick Walsh (Moxy), Jesse Damon (Silent Rage), and anyone else who stops by, to give you an insight into the new release “Sunset and Clark”, Don comments, “Hey everyone come join me and some of my notable musician friends for a rock & roll roundtable to discuss a cool new band called Brothers In Arms and all thing rock!”, Jack says, “Hey all I’m so stoked about this coming Saturday with the Brothers In Arms live stream. Having Don and the killer cast of artists that made this album a dream and then some come true. Please tune in, get your tickets, and come up with some monstrous questions for the Q/A. Ask anything, will be a lot of fun, just a killer hang. See you all at 4 PM eastern, Brothers unite!”

Jack had this to say about working with Steve, “Wow City Wow. Being a child of arena rock I always lent my ear to bands like Kansas, Styx, Journey, REO, Shadow King, yes Shadow King, and then I saw a video for 'That Girl' from this UK band FM, and I was blown away by a Steve's vocal range, melodic feel and his choice for notes on guitar. I always wanted to do a track with all those elements and when Steve agreed to writing the track with me, all my prayers were answered. I love this tune, totally takes me back to a time of when Miami Vice was on TV and when arenas around the world where packed singing each phrase of the songs. Please do yourself a favor check out Steve's work he's a master and a great guy. He just nailed it on this song. What a pro and such a nice guy to work with.”

You can order the album now and there are limited edition bundles available (while supplies last), which can be ordered here. UK/European orders here.