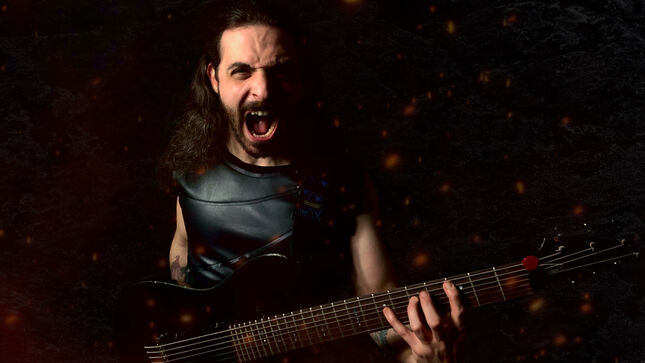 He recently released a single under the JD McGibney & Friends moniker, called “Voices In The Dark”, in order to raise funds for The You Rock Foundation and the National Alliance on Mental Illness (NAMI). The track features the talents of legendary Orphaned Land and The Secret Saints guitarist, Chen Balbus.

The band is currently working with composer and producer Lars Deutsch on a new single to feature the band’s current lineup and to help raise funds for The You Rock Foundation.

Artist Bio: JD McGibney is a warrior guitarist that conquers his battlefields on the wings of dragons. Uniting with the forces of like minded individuals, he fights to strengthen worldly brotherhood and lays his experiences bare for others to see the power of one's trials and tribulations.

With a humble beginning on Long Island, New York, JD McGibney developed a strong bond with playing guitar. He found that the anxiety and inner turmoil growing within him throughout adolescence was kept at bay with the power of music.

This act of self discovery began his mission to help others conquer their own inner demons. Through his candid transparency JD McGibney uses the communal bonding power of music and entertainment to remind people that no matter what their struggle, they are never alone.

From the first moment he stepped on stage as a teenager, JD McGibney was drawn to the connection he found people developed over their love of art. He made a promise to himself to get involved with as many opportunities to continue bringing this community together to strengthen their unity.

Experiencing first hand the power of inspiration and encouragement, JD McGibney goes out of his way to encourage people to take that next first step they might be afraid to take in their lives. Sharing his own personal process, JD lives transparently to show others the possibility of the impossible.