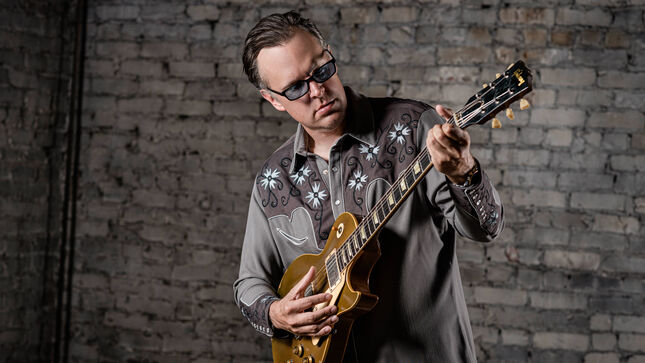 Celebrated blues-rock guitarist and singer-songwriter, Joe Bonamassa, has released his new single, "Time Clocks". This is the third song taken from his forthcoming brand-new studio album of the same name, released on October 29 via Provogue (Europe) and J&R Adventures (North America).

Joe continues his soul-searching evolution on this beautifully poignant Bonamassa-Shirley penned song. At just over seven minutes long, it has all the epic musical grandeur of him at his most expressive and ambitious. With a heart on sleeve narrative weaving its way throughout, the rousing chorus rises to the heavens as he sings, "and the rain soaking through my coat, about to capsize my boat I push it along away from the docks, I was never a good puncher of time clocks."

Backed with cascading vocals from Juanita Tippins and Prinnie Stevens, as well as the supreme musicianship of Anton Fig (drums), Steve Mackey (bass), Lachy Doley (piano, organ) and Kevin Shirley (percussion), it has an aura of pure timelessness.

Listen to "Time Clocks" here, and watch the music video below:

Recorded in New York City, the new album rediscovers Bonamassa at a newfound peak with heartfelt songwriting and an unparalleled Blues Rock prowess. Time Clocks follows Joe’s constant evolution as he continues to forge ahead, bending genres, breaking down walls and defying the odds of the music industry. He’s known as “the man in the suit”, loved by many as the ultimate guitar hero, cited by critics as “the world’s biggest blues guitarist” (Guitar World), and now the music mastermind has found yet another layer of immense new artistry to share with his fans. As one of today’s most in-demand touring acts the road has been long and winding, but the rough journey has moulded his craft into gold.

"The Heart That Never Waits" video:

Bonamassa will return to tour the UK for the first time in three years, when he performs five concerts in April and May 2022, including two nights at the legendary Royal Albert Hall on Thursday, May 5 and Friday, May 6. Joe will also perform concerts at Glasgow SECC on Wednesday, April 20, Cardiff Motorpoint Arena on Friday, April 22, and Brighton Centre on Saturday, April 23.