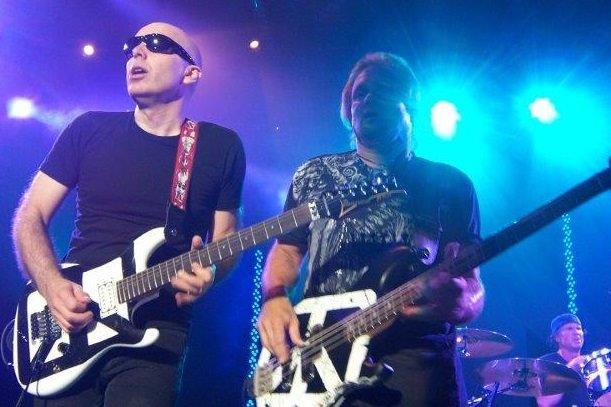 Words and photo by Aaron Small

All-star ensemble Chickenfoot – comprised of Van Halen alumni Sammy Hagar (vocals) and Michael Anthony (bass), along with guitar guru Joe Satriani, and Red Hot Chili Peppers drummer Chad Smith – unfortunately now seems to have both feet in the grave. The super-group released a pair of top-notch studio albums; the self-titled debut in 2009, and Chickenfoot III in 2011. A live compilation, LV, followed in 2012. Since then, things have been pretty quiet collectively. Yet the ‘Foot members have been very active on their own, and in other outfits, satisfying fans with a wide array of new music, tours, and even a book.

Speaking exclusively to BraveWords, Joe Satriani pulls the wire back, thereby providing a rare glimpse inside the coop. “In order for me to move on emotionally, I’ve had to really wrestle with the reality of the situation. I really think that, as heart-breaking as it is for me to admit it, I don’t think the other guys are interested in making another album. So I have to move on. I’m busy making records (Shockwave Supernova will be released July 24th). I’m working on my TV show, Crystal Planet. I want to make records with a rock band; a vocal-based rock band. So I have to go look for another band."

"I’m not going to wait and try to twist the arm of Sammy, Chad, and Mike any more. I’m spent. I’m so tired of doing it, of being the guy that’s always saying, ‘Come on guys, let’s go.’ I don’t mind that. I’m great friends with all of them; I see Sam all the time. But I’ve just had to come to that realization. I think maybe they moved on earlier, and I was just clinging to the hope that we would put out another record. At this point, I think Sammy’s into doing live performances now and then; special occasions. But I don’t think that he believes that making original music is worth his time anymore; which is kind of sad. I just don’t get that part of it. And Chad’s already in a band (RHCP), so there you go. It’s all good, it’s just a bit sad that a band I thought really had a future is calling it quits because they think it’s too difficult, which, I don’t understand that.”