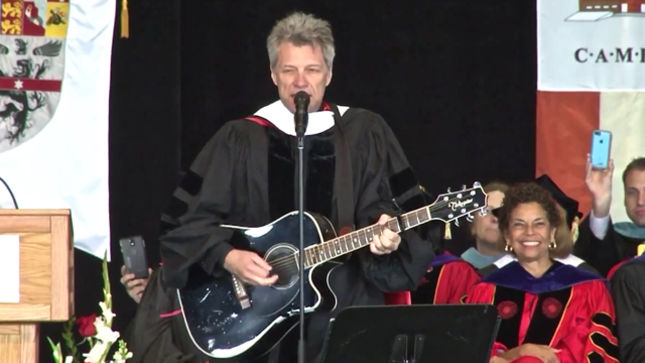 During his remarks at the Rutgers University Camden graduate commencement, Jon Bon Jovi performed a song he wrote specifically to inspire graduates as they start their new chapter in life. Video from the event can be seen below:

Bon Jovi remains one of the biggest bands in the world, churning out $937 million in gross and moving 10 million tickets over the course of its past four tours, all produced by AEG Live. The most recent trek, Because We Can in 2012-2013, sold 2,654,172 tickets resulting in a total gross $255,699,527, marking the third time in six years Bon Jovi ranked as the top tour of the year in Billboard Boxscore.

Jon Bon Jovi will appear at the Baha Mar Casino And Hotel in Nassau, The Bahamas for a brief stay taking place May 22nd-25th.

Trip packages are on sale now. Packages include:

Ticket packages are available at RunawayTours.com.