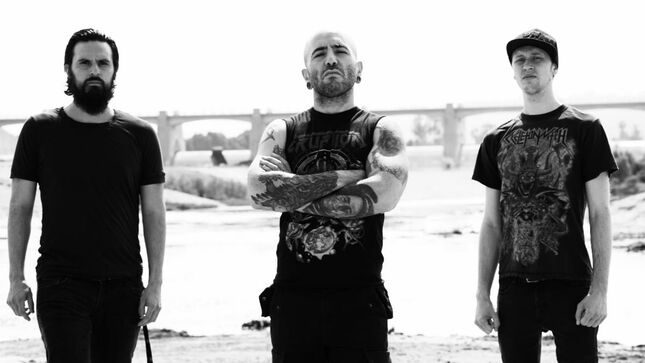 Recently reformed Jordanian thrash metal band Esodic has revealed a guitar playthrough for one of the band’s new tracks, “Undoing.” Watch guitarist Michael Nolasco rip through the song below:

“Undoing” was mixed and mastered by Damien Rainaud (Dragon Force, Once Human, Fear Factory) and produced by Nolasco with bassist Kevin McCombs. The song features a guest appearance by Jeff Potts (Vocana, Mantic Ritual, Warbringer) on lead guitar in addition to Nolasco.

"‘Undoing’ is about the experience of shedding old skin and ridding old versions of oneself, and how those versions will come back to haunt you,” says drummer Zed Amarin.

Born and bred in the underbelly of Amman, Jordan, nearly 20 years ago, Esodic’s sound was inspired by legendary old school - albeit culturally forbidden - thrash and death metal bands like Slayer, Testament and Kreator. Fueled by an insatiable obsession with metal music and anger and frustration resulting from the significant socio-political strife in their country, the band became a regular fixture in the underground music scene of Amman.

Esodic quickly stood out from other local bands, distinguished by their own style of fast-paced, loud thrash metal. Not long after forming in 2003, they began booking gigs and forming a solid loyal following throughout Jordan. Unfortunately, gaining attention for any countercultural activity was no small matter in Jordan and was met with great repercussions. Members of the band were regularly harassed, detained and arrested, and underground shows were often cancelled or raided.

In 2005, Esodic entered an international music competition, The Global Battle of the Bands, marking the first time the group was able to play publicly to a wide audience. Esodic destroyed with their performance, receiving massive praise and positive feedback for their unique sound and onstage presence. In addition to making their way to the finals, Esodic also received the highest number of fan votes in the competition. In the end, the thrashers came in second, but the experience proved Esodic to be a force to be reckoned with worldwide.

Esodic continued to play local shows until 2008 when the Jordanian Intelligence Department raided a show, sentencing the organizers to jail time. Following this incident, the Jordanian underground scene was shut down, as it remains to this day.

By 2010, due to a combination of life circumstances and political unrest including the Arab Spring, all the members disbanded to different parts of the world. But just before disbanding, Esodic released a split record with Tampa-based death metal band Generichrist on Deathstar Records.

In 2015, drummer Amarin relocated to Los Angeles and began gathering all of Esodic’s recorded material for mixing and mastering in preparation for their first EP, Mirrors of Disgrace. Though the members had disbanded, they had all agreed that this album was an important snapshot that needed to be released. Mirrors of Disgrace was self-released in February 2018. Two years later, Amarin made the decision to revive Esodic and continue the legacy. “Undoing” is the first musical output from the reinvigorated trio.

“Our new line up has a strong multiple disciplinary foundation, ensuring the beginning of a new era for Esodic,” Amarin says.

“Undoing” is available at Distrokid.