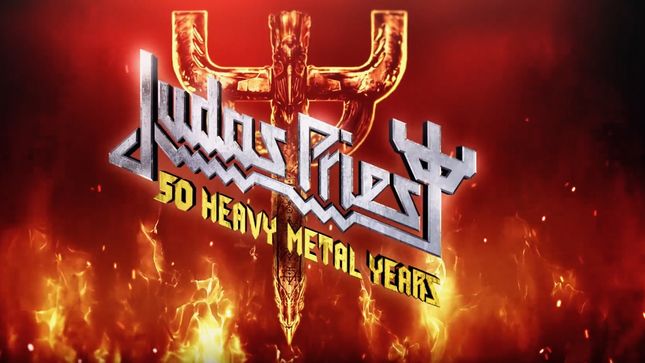 Over the past 50 years, Judas Priest’s music has come to define the metal genre with such benchmark albums as Sad Wings Of Destiny, British Steel, Defenders Of The Faith, Screaming For Vengeance, Painkiller and Firepower, and global hits including "Breaking The Law", "Living After Midnight" and "You’ve Got Another Thing Coming".

During this time, Judas Priest graduated from playing Britain’s clubs and theatres in the 1970's to headlining the world’s biggest arenas in the ‘80s, ‘90s and beyond - with their evolving music and live performances also came a powerful and unique identity - a look which has both defined the group and influenced future generations of metal bands.

Judas Priest and Rufus Publications have released the first ever official Judas Priest book documenting the bands extensive history over the last 50 years, titled Judas Priest - 50 Heavy Metal Years, the book has been put together by David Silver, Ross Halfin and Jayne Andrews.

“I've photographed Judas Priest from 1978 until now and of all the bands I’ve worked with they are one of the most enjoyable to me - you have to love the mighty Priest.” - Ross Halfin, August 2020.

Watch a new video trailer below, and order the book here.

Rufus Publications have made four incredible editions of the book available including an edition designed to raise money for The Glenn Tipton Parkinson’s Foundation and a giant 410mm square edition supplied in a beautiful black metal slipcase.

The Deluxe Edition: 500 numbered copies 12” square - bound in black leather with a 3D lenticular to the front - gold foil and an exclusive fold out poster. Each copy is personally signed by Rob Halford, Glenn Tipton, Ian Hill, Richie Faulkner and Scott Travis