K.K. DOWNING Discusses Leaving JUDAS PRIEST In 2011 - "We Were Planning To Do A Farewell Tour, And We Were All Going To Retire"; Audio 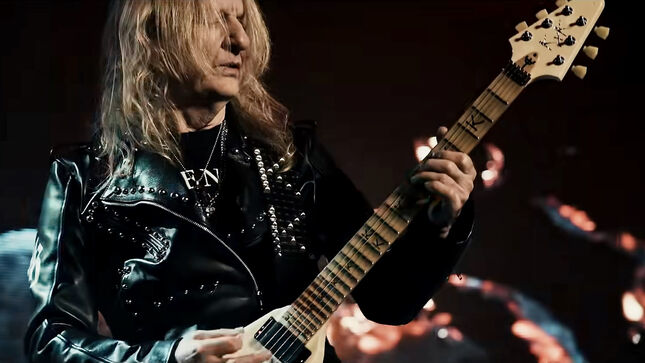 During a new interview with Planet Rock's "My Planet Rocks", DJ Wyatt asks former Judas Priest guitarist K.K. Downing to tell him why he left Priest just over 10 years ago.

Says Downing: "Well, it's not a one-liner story, but you know, I mean... just things came to a head in 2010, and everything seemed to be getting a bit tough really, the spark seemed to have gone. And we were planning to do a farewell tour, and we were all going to retire, but certain things happened at the end of 2010... I couldn't bring myself to do that, because I didn't think no one would enjoy it. And if was going to be the last thing I did, after such a wonderful career, I felt that I really wanted to go and enjoy it, but certain things I felt that would stop me doing that. And Rob (Halford) was very active in 2010, doing a world tour with his band. And lots of things came to a head, so I kind of bowed out. But, a few months later I did change my mind, and I was speaking to Ian (Hill) about doing the tour, but it seemed as though they had already made their mind up to carry on with Richie (Faulkner), who they'd found, and they just made the press release."

Listen to the complete interview below:

KK’s Priest is set to tour worldwide as soon as current restrictions are lifted. Details of touring to be announced.