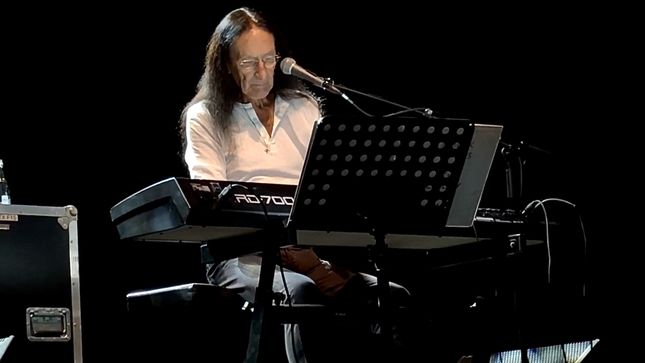 In what is believed to be Hensley's final interview, with eonmusic's Eamon O’Neill, Ken was asked if he ever had the desire to get back together with Uriah Heep, or was that something that just didn't interest him?

Said Hensley: "No. I mean, I did the reunion thing in Moscow with Mick [Box] about five or six years ago, and I was just doing it for money. That wasn't all together a pleasant experience because I expected it to be like it was in 1975 or '73 or '74, so I was crushed by my own expectations, to be perfectly honest with you.

"I'm perfectly happy with where I am. I may have played my last show, because the virus has killed every show that I'd planned for this year, and we're unlikely to be able to play next year. But that doesn't bother me either, because I've had such a wonderful life, and so much of my life is way beyond anything I ever dreamed I would achieve, so I can sit back and say it was great, it was fantastic, and just get on with other things. I'm just very peaceful that it happened with where I'm at, and I know that if I got on stage with Heep again, it would just be a facsimile, and I never want to be part of that."

Read the complete interview at eonmusic.co.uk.

The news of Ken Hensley's death was delivered by his brother, Trevor, in a post on Facebook.

Said Trevor Hensley: "I am writing this with a heavy heart to let you know that my brother Ken Hensley passed away peacefully on Wednesday evening. His beautiful wife Monica was at his side and comforted Ken in his last few minutes with us. We are all devastated by this tragic and incredibly unexpected loss and ask that you please give us some space and time to come to terms with it.

"Ken will be cremated in a private ceremony in Spain so please don’t ask for information about a funeral. Ken has gone but he will never be forgotten and will always be in our hearts."