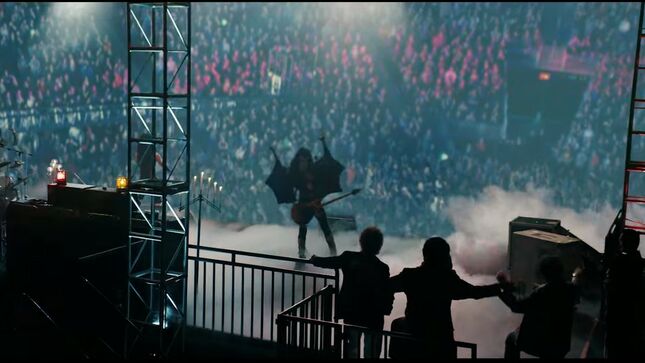 A new trailer has been released for Spinning Gold, out in theaters on March 31, 2023. Spinning Gold shows the rise of Casablanca Records and owner Neil Bogart, responsible for bringing KISS to the mainstream as well as Donna Summer, The Village People, and Gladys Knight.

A summary of the movie below:

“What do Donna Summer, Parliament, Gladys Knight, The Isley Brothers, The Village People, and Bill Withers all have in common with the rock band KISS?  They all rose to their musical heights under the watchful ear of the music industries most colorful and brilliant music producer, Neil Bogart, founder of Casablanca Records, the most successful independent record company of all time. Along with a ragtag team of young music lovers, Neil and Casablanca Records would rewrite history and change the music industry forever.

“Their mix of creative insanity, a total belief in each other and the music they were creating, shaped our culture and ultimately defined a generation. In a story so unbelievable that it can only be true, comes the motion picture event of the musical journey of Neil Bogart and how his Casablanca Records created the greatest soundtrack of our lives.”

Some of today’s hottest music stars are playing the icons who inspired them and singing their most popular songs including Grammy and Golden Globe nominee Wiz Khalifa as George Clinton, Jason Derulo as Ron Isley of the Isley Brothers, Pink Sweat$ as Bill Withers, Grammy Award nominee Tayla Parx as Donna Summer and multi-Grammy winner Ledisi as Gladys Knight.