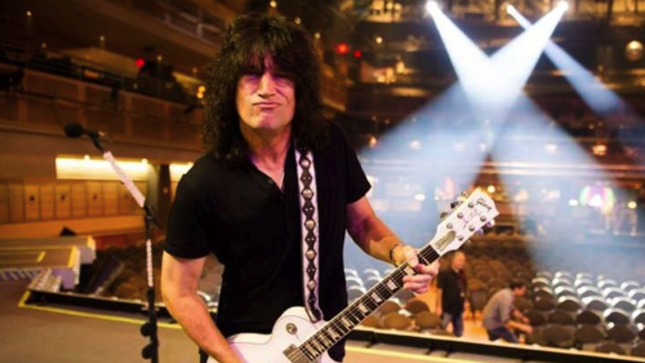 KISS‬ guitarist Tommy Thayer will attend this year's NAMM show in Anaheim, CA. He will make a special appearance for Epiphone (Booth 300B - Level 3) at 1:00pm on Saturday, January 24th.

For information and updates on NAMM 2015 go to the official event website here.

KISS recently checked in with the following update:

"German ‪‎KISS‬ fans watch out! The anniversary celebrations go on with the KISS 40 compilation now available exclusively for Germany as a limited and numbered 2CD SteelBook Edition featuring an exclusive 3D lenticular magnet and KISS patch! Get your copy here ."

KISS 40 includes one track from every major album release (studio, Alive & hits collections) plus three live selections from the 2000-era and features the band's biggest songs including rock and roll anthems such as "Detroit Rock City", "Love Gun", "Beth", "Rock And Roll All Nite". "Psycho Circus", "Forever", "I Was Made For Lovin' You", "Lick It Up", "Heaven's On Fire" and "Hell or Hallelujah". First time commercial CD release live recordings of "Deuce" (from 2004 tour), "Cold Gin" (from 2009 Alive 35 tour), "Crazy Crazy Nights" (from 2010 Sonic Boom Over Europe tour) and the previously unreleased 1977 demo of "Reputation" round out the set for the KISS Army.

Check out a promo clip below: