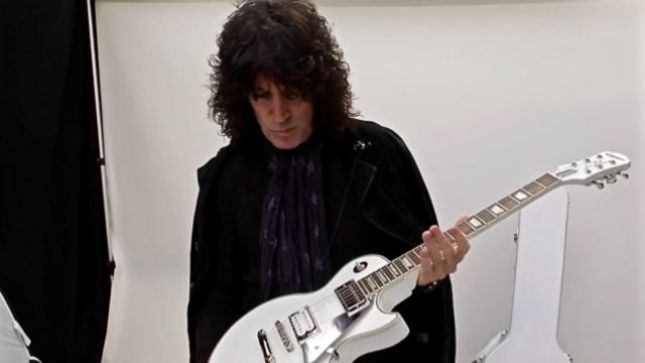 Q: What are a few of your favorite “industry moments?”

Thayer: "Gene Simmons wrote a song with Bob Dylan and I’m guessing it was around 1991. One day I got a call from Gene and he says, 'Get a drummer and a keyboard player and meet me down at Cherokee Studios at 7pm tonight, we’re going to record a song I wrote with Bob Dylan.' I’m like wow, seriously? I brought my Les Paul and two acoustic guitars, a 6 and a 12-string that I borrowed from my buddy Marc Ferrari. I get there and sure enough in walks Bob Dylan and his girlfriend. Suddenly I’m thinking it’s Bob Dylan, the guy who influenced the Beatles and Jimi Hendrix, unreal. He says let me show you the chord changes and we proceed to pass the 12-string acoustic back and forth. It seemed like one of the most surreal things I’ve ever experienced.

He was quiet and eccentric, but friendly. The thing that stood out to me more than anything was Gene. He won’t mind me saying this, but I’ve never seen Gene be anything but 'I’m Gene Simmons and I’m the center of the universe,' but around Bob Dylan, he was like a kid just happy to be in the room. I do remember taking the strings off the 12-string the next day before I gave it back to Marc. I still have those strings."

Hughes & Kettner met up with Thayer before the band's 2017 show at Frankfurt Festhalle in Germany. Tommy discusses shows, fans and gear in the video below.

“Tommy has played H&K amps for years, and we chatted about his signature Duotone, TubeMeister, the current KISS tour and how hard-working the band still are after all these years. Enjoy! (By the way, when we shot this our new era 1 acoustic amp wasn't out yet, which explains Rich's shock as Tommy picks it up!)”

Go to this location for the complete KISS tour itinerary.