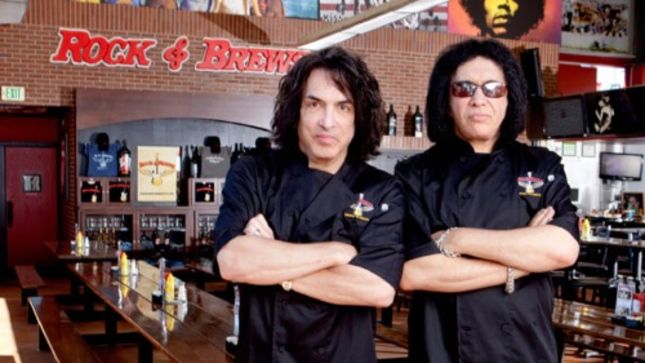 According to a report by OC Weekly, KISS founders Paul Stanley and Gene Simmons are gearing up to open a new Rock & Brews location in Buena Park, CA "right across from Medieval Times and their sword-clanging knights."

The groundbreaking is going to happen next Monday, March 30th, with Buena Park Mayor Art Brown and probably select members of The KISS Army. The restaurant is slated to open this summer at 7777 Beach Boulevard, Buena Park, which for now is just an empty lot.

Rock & Brews opened in El Segundo in 2012 and has since expanded to more locations including Redondo Beach, LAX, Maui, Albuquerque, and Orlando. The word is they're planning about 100 more restaurants in the coming years.

Rock & Brews has been named a break out brand of 2015 by the industry publication, National Restaurant News. Check out a scan of the article for the latest issue here.

As previously reported, Crews - a premier retailer and food and beverage operator at top airports - announced plans to open a second Rock & Brews at LAX (Los Angeles International Airport). The rock-inspired restaurant founded by Paul Stanley and Gene Simmons of KISS will open to travelers in the fourth quarter of this year as part of the $508 million overhaul of Terminal 1 that is being spearheaded by Southwest Airlines in partnership with Los Angeles World Airports (LAWA) and Westfield.

“We are thrilled to add a little rock style excitement to the travel experience of Southwest Airlines guests in Terminal 1,” said Stanley and Simmons in a joint statement. “It is an honor to partner with Crews, Southwest Airlines, Westfield and Los Angeles World Airports to make this happen.”


Go to this location for more details on the new venture.

Paul Stanley and Gene Simmons hosted the grand opening celebration for the new Rock & Brews Oviedo location in Florida on Tuesday, January 6th. MouseSteps.com covered the event, interviewing Stanley and Simmons as well as the cutting of the ribbon. Rock & Brews also hosted 100 veterans on the day and gave $10,000 to the Lake Nona Fisher House during this event.

“Oviedo marks our first Rock & Brews restaurant on the East Coast,” said Stanley. “For every Rock & Brews opening, we look forward to paying tribute to the local service men and women in the areas in which Rock & Brews operates.”


Check out the footage below: