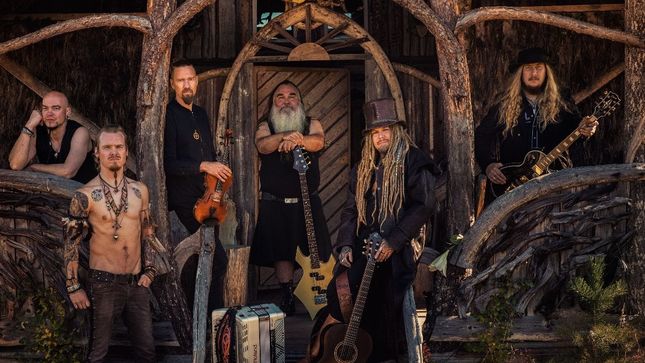 Finnish folk metal Superstars Korpiklaani have unveiled “Mylly” as the second single from their upcoming album Jylhä (out February 5, 2021, on Nuclear Blast). The song is accompanied by a stunning and darkly atmospheric music video, which manages to capture the song’s rather melancholic tone quite perfectly. As of today, Jylhä can officially be pre-ordered in various physical formats here.

"Mylly" (engl. “Mill”) was influenced by the story of a working man’s journey to a mill, causing him to cross paths with what seems to be the devil: “Finnish folklore tells the story of a man’s journey to the mill. Along the way, he sees a figure sitting on a fence, a “devil” with a hoof as one foot. The man is frightened at what he sees and freezes in place. The character disappears and the man remembers hearing the story of the devil living in the mill. Eventually, the man continues his journey and overcomes his fears. At the mill, he feels he is finally equal to the past and the present. Fences rot, fall, but the spirit and stories remain, over generations and over ages. The video tells us about our character's journey to the mill with the last of his grains. "Devil" is the deceiver, who is tempting the man to give up his grains by appealing to his weaknesses."

Jonne Järvelä states: “'Mylly' started taking shape when our ex-accordion player Juho Kauppinen told me he had some song ideas that might fit Korpiklaani. The main riff caught my ear immediately, so I was happy to start working on the track. After just a couple of days the song was ready, and Tuomas Keskimäki wrote the lyrics right away as well.

The video saga that started with 'Leväjuhta' will continue, with actor Yrjänä Ermala returning to the main role. Ermala's looks and the sound of his name might give you the impression that he's a mean version of the Finnish 'devil' aka 'perkele', but the man's heart is pure gold. Yrjänä is not only an actor, but also a luthier of traditional instruments, a blacksmith etc... is there anything he can't do?!

“Also acting in the video are my 10-year-old daughter Tinja Järvelä (who was featured in our 'Henkselipoika' video a couple of years ago) and actor/musician Toni Koskipuro, who nailed the role of the cunning devil!”

The music video for "Mylly” was again directed by Markku Kirves who also shot the video for the first single "Leväluhta”.

Leväluhta (or Levänluhta) is a spring in Isokyrö. The remains of approximately a hundred Iron Age bodies have been found buried there, and it remains unclear why the deceased were laid to rest in the spring. In the story, the narrator himself is one of the buried, floating in the lap of clear water beyond time and knowledge. The video tells us a fictional story about what may have happened in the mystical Leväluhta...