KROKUS Announce Adios Amigos Farewell Tour - "We'll Not Be Back"

Veteran Swiss rockers Krokus have checked in with the following announcement:

"Since 1975, Krokus stands for honest, handmade, quality power rock. No other Swiss Rock Band sells their albums and their back catalogue worldwide like Krokus. More than 15 million records sold, worldwide tours, gold and platinum in the US and Canada. Our Rock milestones can still be found today all across the globe from Australia to the USA, Mexico, Russia, even Japan and China. Krokus video clips are viewed millions of times on YouTube.

In 1980, the triumphal march began throughout America, Canada and England. The band cemented their reputation and name as a strong, no-frills live band. Unforgettable headlining tours and on the same bills with great bands like AC / DC, Van Halen, Rush, Ted Nugent, Judas Priest, Motörhead, just to name a few. Wild times, big adventures, which brought the band, among other things, the honorary citizenship of Memphis Tennessee. Krokus were also the first Swiss band to sell-out the Hallenstadion, Zurich in 1982.

But there was also death, illness and internal disputes that drove the band to the brink of destruction. Then, in 2008 the big comeback. The story of Krokus is unique. Marked by ups and downs. From grandiose stadium concerts to sweaty club gigs. We overcame trends, insidious US managers, harsh splits, bad deals, shady lawyers, drugs, lousy fast food, endless bus trips, disco, grunge, grotesque record companies, and hypocritical advisors.

Krokus shows have always been special and should stay that way. That's why we decided to stop when it's still really good. That's how the fans should remember us. Unlike other bands that are on their eternal 'farewell tour', we will keep our word and pull the plug at the end of 2019, handing over the Rock Magic Wand to the youngsters." 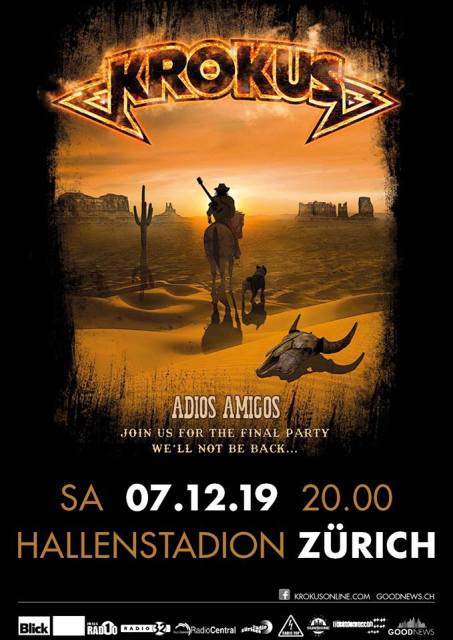 In addition, the band members have issued personal statements.

Marc Storace: "We look forward to a grandiose 2019 Adios Amigos World Tour with the final highlight in Switzerland."

Fernando von Arb: "We have signed reciprocally contracts with each other that it really is over. We will stick to that. Every party has to end eventually."

Chris von Rohr: "It was an unparalleled journey with all the ups and downs rock life has to offer. Now we are looking forward to the final lap of honor and will give it our all once more. We owe that to ourselves and our fans. The 7th of December, 2019 will be unforgettable as it was on the 27th of March 1982. "