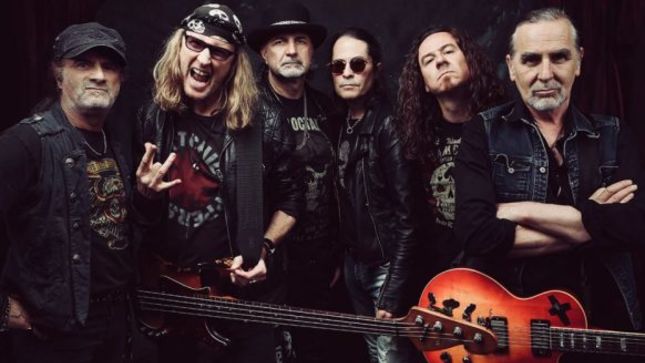 Marko Syrjala at Metal Rules caught up with Krokus frontman Marc Storace to discuss the reasons behind the band's retirement, the crazy years, the lost years, and putting Krokus together in 2008. Following is an excerpt from the career-spanning in-depth interview, which includes mandatory AC/DC questions.

Q: In September of 2018, Krokus announced that Adios Amigos World Tour will be its last tour, and the band will retire after that. What are the reasons behind that decision?

Marc: "Well, I guess we want to stop on a high point while we still can — when we are still kicking ass and not after the energy starts to go down because the band is only getting older. We’ve been around since decades…well, I joined Krokus at the end of 1979. And we released Metal Rendez-Vous, which took us straight into the international charts. And then we toured the USA and Canada and the rest of the world. We kept it up for years and made it high into the US Billboard Charts with the Headhunter album. We had some ups and downs and we ended it in 1988 feeling pretty burned out! And, now, since the reunion, it’s another ten years going by, even more than ten years. So that’s a long time. It’s a long life, especially for a band that comes from Switzerland, which, being a seemingly perfect country full of banks, watch factories, cows, chocolate and gorgeous landscapes, was really never expected to donate any hard rock bands to the international rock scene at all in the very beginning. So, for us, it’s like, we accept the fact that we have to stop one day."

Q: In January of 2017, Krokus released a covers album Big Rocks, and it’s going to remain the band’s last studio album. How does it feel to end the band’s recording career with a covers album? I think it’s not something you wanted to do?

Marc: "Definitely not. I would have loved to record a new studio album with the band, but everything happens for a reason."

Q: So, what you think is the reason why the band decided not to release new music anymore?

Marc: "I think the depression within the music industry today and the deal with our record company made the reality of creating a new original-song studio album look quite bleak. It takes a year and a half to write, record and release a new album, whereas a cover album you can do in half a year with about a quarter of the budget. So, when budgets are extremely cut down you have to expect repercussions in whatever industry."

Q: Your name popped up (again) when Brian Johnson announced his retirement from AC/DC in 2016. Again, it was more or less just speculation, but what you would have done if the band had asked you to replace Brian at that point?

Marc: "Yeah. I thought, what if they call me, can I do it? Because I can do Bon Scott stuff no problem. I love singing Bon Scott songs. But Brian Johnson, he has an extremely high pitched voice, and it’s actually not a voice I like to try to imitate because that amount of squeezing would destroy my vocal cords and give me a stiff neck (laughs). I would more likely be doing my own tuned down versions of the Brian Johnson songs along with Bon's."

Storace recently revealed that the band's Adios Amigos World Tour will be extended to include dates in the US, Canada, and Mexico. The trek was initially set to conclude on December 7, 2019 at the Hallenstadion in Zürich, Switzerland.

Says Marc: "We always said Zürich is the last show for Europe - but USA, Canada and Mexico wants some 'Adios' too! That's why we do an encore in 2020 there - we think our fans deserve that - they cannot all fly to Europe - cheers and enjoy the summer, Krokers."