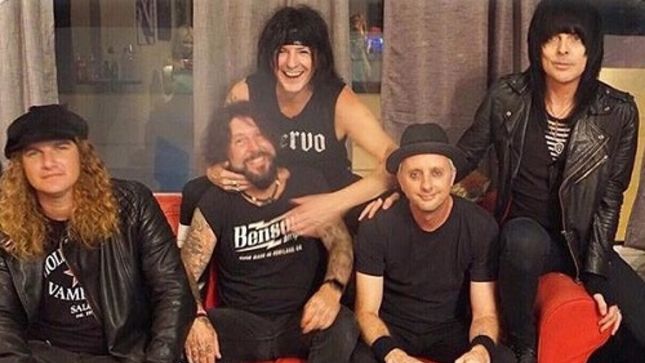 Prior to headlining The Rockpile in Toronto, Ontario, L.A. Guns guitarist Tracii Guns – who recently reunited with vocalist Phil Lewis – invited BraveWords scribe Aaron Small on board the band’s tour bus for an exclusive chat about all things LAG.

First matter of discussion was the recent L.A. Guns lineup change. In March of 2018, guitarist Michael Grant (who had been with the group since 2013) and LAG parted ways. Then Johnny Monaco (Enuff Z’nuff) joined the band for a very brief stint, and now Adam Hamilton – who played bass on LAG albums Waking The Dead, and Tales From The Strip – is the new rhythm guitarist. “We had (guitar) pics made that just say Stage Right on them; we never know who’s coming or going on that side of the stage,” jokes Tracii. “Adam’s been in the band forever (from 2001 – 2007). I just thought it would be really cool to have this kind of shredder guitar player on the other side; make a spectacle of it. But I guess in the end, that’s not really what L.A. Guns is. Having Adam, even at rehearsal before the shows, it was like, ‘oh, that’s solid!’ I’m always trying to improve things that don’t need to be improved. Right now, it’s nice.”

Last month Tracii took to Instagram saying he was about to record “what has to be the best guitar work I have ever done.” Reflecting upon that posting, Tracii admits, “That’s where the stress lies. People are paying attention to me all of a sudden, which they really didn’t for years. It’s got to be good, it’s got to be something. I think we managed to raise the bar a little bit with the one that’s going to be out next.”

That next album is nearly complete, with all the music in the can. “Just waiting for Phil to finish (his vocals). Everything’s done. All the lyrics are written, all the melodies. The songs are done, he’s got five in the bag, so he’s got to do seven more.” We’re looking at a twelve-track album then? “I think it’s going to be eleven with a bonus track. Wait, no, no, it’s 13 songs; all original, no covers. No ballads. There’s something close to a ballad; it’s a murder ballad, ‘One More Season In Hell’. We have a song that is like The Cult – Sonic Temple, it’s called ‘Gone Honey’ – that’s a really cool, different kind of thing. A lot of the album’s really heavy. There’s ‘The Devil You Know’, ‘Loaded Bomb’, ‘Boom’, ‘Rage’ – we have some with one-word titles and some with all these words in the title. The album’s going to be called Wasn’t Tomorrow Great.”

When it comes to artwork, that title lends itself to so many different possibilities. “Yeah, we were thinking about calling the album Gravity’s In Control. But, last minute change. Phil’s wife was coming up with this concept for the globe hanging in space, but it was the L.A. Guns logo. I think that’s still in order, cause you’re looking at the world – Wasn’t Tomorrow Great – when you dream, it’s always about something that’s going to happen. The dreams are usually great.”

Tracii handles all of the guitar parts on Wasn’t Tomorrow Great; lead and rhythm. “It was recorded just me, Johnny (Martin – bass), and Shane (Fitzgibbon – drums),” confirms the six-stringer. Wasn’t Tomorrow Great is coming out really quickly as the previous studio album, The Missing Peace, was released in October 2017, and the live album, Made In Milan, was just released in March 2018. New material is always welcome, but why such a rush? Why not tour on The Missing Peace more? “Because we toured so much before The Missing Peace,” answers Tracii. “And, people have a short attention span. It’s nice to hear now – today – how much people are still listening to The Missing Peace. We weren’t going to do one this quick, we were going to wait about another six months from this point, but we had a break and I was home, and I wrote all the music really quickly; not intentionally. I didn’t sit down and say, ‘ok, got to write an album now.’ It was like, ‘we’re supposed to start writing soon…’ Then all this really, really cool stuff came out. Me and Phil, we have a co-writer, this guy Mitch Davis. I just started sending him demos and he was like, ‘Holy Shit!’ I was like, ‘Jesus Christ, let’s just do this.’” And the potential release date? “We’re looking at March through Frontiers Music.”

Once again, Tracii is producing the album. “I did the last one, I did this one. I don’t wanna fuck with the system; the system works. We did do an upgrade on this. We went to a really nice studio – Big Bad Sound LA – to record drums, to record all the instruments. Where on the last album, we went to pretty nice studios to do the drums, and then everything was done in my studio after that. But I managed to get 95% of the guitar done in the same room where we recorded drums, which adds a certain kind of togetherness. I used the same room mics for the guitars that we used for the drums. It’s like, wow! You just pull the faders up and it doesn’t need to be mixed, everything fits. It was like a Godsend.”

All counted, there’s seven L.A. Guns albums of original material featuring both Tracii and Phil. Does that mean the songs found on Tales From The Strip (2005) and Hollywood Forever (2012) – which featured guitarist Stacey Blades in place of Tracii Guns – are dead and buried, never to be played live again? “Fuck those songs man. That’s not L.A. Guns, I’m not on those records.” To be fair, the unexpected does happen occasionally. Case in point, Guns N’ Roses performing “Slither” by Velvet Revolver live. Of course, Velvet Revolver featured GN’R members Slash and Duff McKagan, along with Stone Temple Pilots vocalist Scott Weiland. No one ever thought Axl Rose would sing that song, but he is. “I think Axl’s being nice,” offers Tracii. “It is a good song, it was massive on radio. But nobody knows shit off those fucking L.A. Guns records; it’s the truth. Nobody knows shit off half the records I did with L.A. Guns either. The first three, maybe a glimpse of Vicious Circle, a glimpse of Waking The Dead. Those are records we love, and there’s certain songs from those that the audience knows, but overall, to be realistic, the first two records and ‘Kiss My Love Goodbye’ and ‘Over The Edge’ off Hollywood Vampires – that is by far and away the most popular stuff. Then there’s The Missing Peace – it came out of nowhere.”

Catch L.A. Guns live in concert at the following shows: