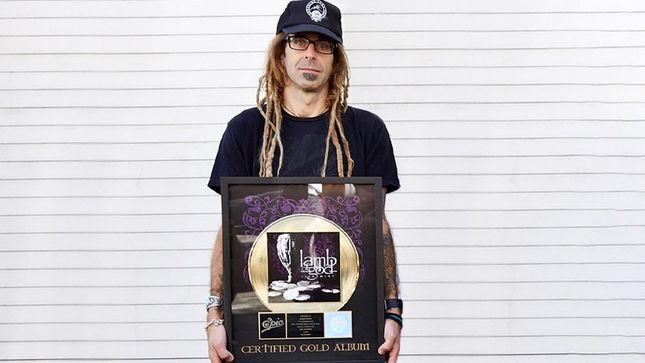 "We're excited to announce we'll be launching a new campaign on Propeller to raise funds for Libby's Legacy Breast Cancer Foundation here," begins a message from Lamb Of God.

"Earlier this year, Sacrament was certified GOLD by RIAA for sales exceeding 500,000 units. As he did with Ashes Of The Wake, Randy Blythe will be offering up his personal Sacrament Gold Record plaque to raise funds for Libby's Legacy. Make a donation to be entered for a chance to win Randy's Gold Record plaque and handwritten lyrics to "Again We Rise".

"You can also purchase handwritten lyrics by Randy Blythe to a Lamb Of God song of your choice, a signed Mark Morton signature guitar, and an 18" Meinl China used by Art Cruz on the Slayer Final Tour, with 100% of proceeds going to Libby's Legacy Breast Cancer Foundation. Purchases of the aforementioned memorabilia will also enter you to win Randy's Gold Record.

"Let's raise some funds for a good cause!"