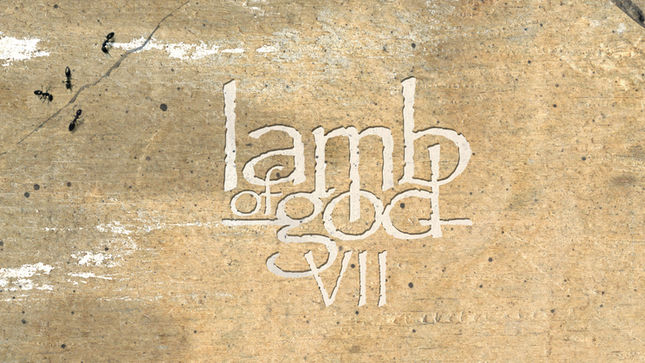 Lamb Of God have just teased fans with an email stating that "Lamb Of God VII" is "coming soon." Check out the "black" landing page here. The band's anxiously awaited new studio album follows 2012's Resolution, which debuted on the Canadian Soundscan charts at #2 and the US Billboard charts at #3.

Lamb Of God's newly launched Instagram page has visual proof that the band has definitely started work on their next studio album.

In 2010, a 19-year-old super-fan rushed the stage during a Lamb of God concert in Prague. To protect himself, singer Randy Blythe pushed the fan away. Unbeknownst to Blythe, the young man hit his head on the floor when he fell and later died from the injury. Blythe was promptly incarcerated on charges carrying a prison term of five to ten years.

Thirty-seven days later, he was released on bail to await trial. Although legal experts told him not to return to the Czech Republic to face the charges, Blythe explained that he “could not run away from this problem while the grieving family of a dead young man searched hopelessly for answers that [he] might help provide.”

In Dark Days, Blythe tells the story of his incarceration and the wild life that led up to it. As he explains, “Most substance abuse books end with the author getting sober. My book starts there.”

Dark Days will be released on July 14th via Da Capo Press. Random House will release the book in the UK and associated territories.

Randy Blythe has announced his upcoming photography exhibition, D Randall Blythe: Show Me What You’re Made Of, taking place from May 2nd – June 30th at Sacred Gallery NYC. The opening reception will take place on May 2nd from 8-11pm.

Sacred Gallery NYC is located in Manhattan's SoHo District at 424 Broadway on the northeast corner of Broadway and Canal.

In addition to his work with Lamb Of God, D. Randall Blythe is the author of the forthcoming memoir Dark Days, a music critic at the highly acclaimed TheTalkhouse.com, has acted in movies filmed in America and Asia, and periodically composes music for the Richmond Ballet.

“I've been lucky enough to travel literally around the world several times for my job, and for the last few years I have carried a camera with me everywhere I go,” states Blythe. “Show Me What You're Made Of will showcase fine art prints of what I consider to be some of the most striking images that I have collected, both at home and during my travels. The body of work is quite diverse, and in an attempt to highlight that diversity, all the photos will be shown in custom made frames made of reclaimed wood, adding to the individuality of each piece. The frames are made by my friend, Richmond, VA musician Greta Brinkman (former bassist for Moby, The Deborah Harry Band, White Cross, and currently with RVA doom merchants Drug Lord). I am especially pleased to have my first exhibit at Sacred Arts, a gallery with such a solid connection to my community- the underground music and arts scene. I hope to see as many of you as possible at the opening, so come on out, check out some photography, and be sure to say hi to me and Greta!”

Sacred Gallery NYC was established in December of 2009 by gallery director Kevin Wilson. The gallery’s mission is to exhibit a diversity works and artists. Over the last five years, Sacred has featured graffiti artists, painters, photographers, print makers, comic book artists, documenters, and many other types of artists using a variety of mediums, including blood and live performance graffiti. The gallery prides itself on the accommodations that are provided to the diverse communities of artists that New York City and the world have to offer.