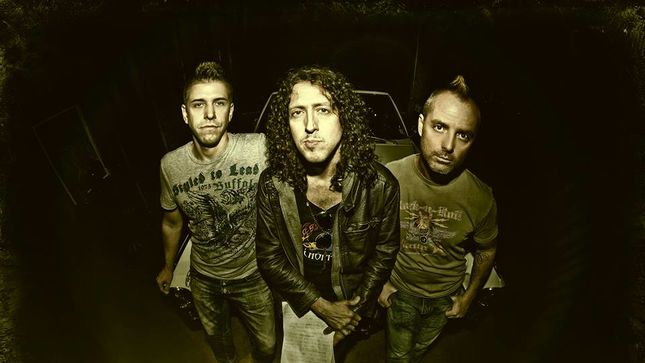 The band's new album, produced by the Grammy-winning Steve Thompson (Guns N' Roses, KISS, Metallica), is due in January. Complete details on the album to follow - in the meantime, read a press release below.

Few musicians have the vocal prowess to sing on the world stage - and be known for their voice. Robert Plant comes to mind, Freddie Mercury, Axl Rose. Even fewer have the vocal diversity to sing successfully for multiple bands - delivering epic vocal performances for all of them.  Paul Rodgers is one, killin' it with Free, Bad Company and The Firm.

Kelly Keeling, while he didn't sing on records that soared as high as his vocal brethren, commands that kind of voice - a vocal range and style that's at once epic, unique and dynamic, singularly his own, but amazingly diverse. He's sang on 60+ albums, some platinum, some gold, and been on movie sound tracks. Trans-Siberian Orchestra, legendary Baton Rouge, Danny Koker's fast-rising Count's 77, Alice Cooper, O'2L, Blue Murder, John Norum, Carmine Appice's Guitar Zeus, Michael Schenker Group, Heaven and Earth, Erik Norlander, George Lynch, Dokken and dozens more all are on his list.

For many of these, Keeling laid down his vocals then moved on. But earlier this year he joined forces with drummer Marc Brattin and bassist Scott Griffin (LA Guns) to form Las Vegas-based rock project Foundry. Within several months, he had laid down the vocals for 7x Grammy-winning producer /mixer Steve Thompson (Guns 'N Roses, Metallica, KISS, KORN), to mix a new record with engineer Matt Breunig of The Killers fame on the dials, at studio veteran Bobby Ferrari's Vegas View Studios. And not only did Keeling sing, he wrote the lyrics to all the songs, as he's done so many times over his career.

The final product, mastered by ever-talented Maor Appelbaum in Los Angeles, is stupendous rock.  Self-titled Foundry, the debut album is set for release on January 5, 2015, with the single "Vegas Baby!" already hitting the internet air waves.  While Keeling loves working around the world for lots of talented musicians, "Foundry is my main band," he has said several times recently. The Foundry record is that good, and the band's vibe, that  spectacular.

Never stopping, Keeling embraced Foundry on the heels of finishing contributions to two other significant albums - Red Zone Rider, where he provided vox, fretless bass, organ, with with Vinnie Moore (Solo Artist, Alice Cooper, UFO), and Scot Coogan (Lita Ford, Ace Frehley, Brides Of Destruction), and Count's 77, where he provided vocals to several songs on the Count's 77 debut album recorded in Vegas with Danny "The Count" Koker, star of HISTORY channel's "Counting Cars," as the front man, and powered by the blazing twin guitar team of John Zito and Stoney Curtis, who guest solos on four Foundry songs and said: "It's an absolute honor to play on a Kelly Keeling record. I love that guy!"

A professional singer since age 14, Keeling initially made his mark as the guitarist then lead singer of the LA-based band Baton Rouge, which scored three Top 40 AOR hits in 1990 - "Walks Like a Woman," "Doctor," and "The Storm." This led to Alice Cooper calling upon him to provide backing vocals for "Hey Stoopid."

After Cooper, Keeling collaborated with a host of renowned hard rock musicians, joining Michael Schenker for MSG's "The Unforgiven" and "Live" world tour albums. Thereafter he wrote original songs for Gary Barden, Graham Bonnet and Himself for The Tales of Rock & Roll MSG album, and then acted as primary songwriter, singer, multi-instrumentalist, mixer and producer of Carmine Appice's project (Appice known for Vanilla Fudge and King Kobra).

Never breaking for long, Keeling wrote with Don Dokken for the Dokken albums "Long Way Home" and "Hell to Pay," and performed a number of sold-out acoustic shows with Don Dokken, opening for Queensrÿche and others. This was followed by him singing on former Dokken guitarist George Lynch's album "Furious George," and a tour with George Lynch.

In the 2000s, Keeling recorded and toured with the bands O'2L (featuring all members of Trans-Siberian Orchestra, west coast), and recorded another eight songs intended for another solo album, appearing with executive producer Marty Paris and rendering the studio album, "Paris Keeling," as well as a solo recording career with the album "Giving Sight to the Eye."

A continuing multiple threat as singer, songwriter, bassist, producer and mixer, Keeling shows no sign of wearing out. And if all goes as planned, Foundry may be his most explosive project yet - and that's saying something.