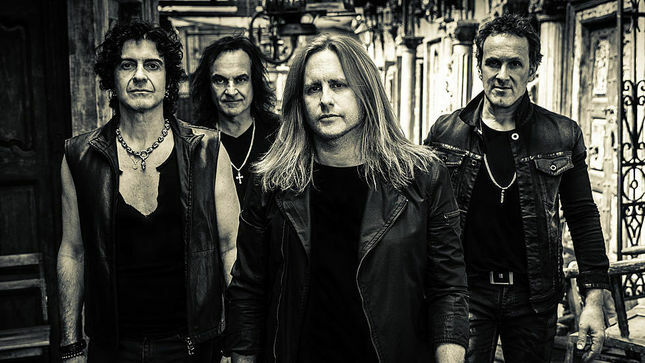 Last In Line - Vivian Campbell, Vinny Appice, Andrew Freeman and Phil Soussan - recently revealed that they were back in the studio recording their upcoming third album, to be released via the band's new deal with earMUSIC, home to artists including Deep Purple and Alice Cooper.

Bassist Phil Soussan, appearing on the May 25 episode of SiriusXM's Trunk Nation With Eddie Trunk, issued the following update:

"We have an EP coming out in August, which we'll have an announcement about, 'cause it's a very special EP... there's something very, very cool about it, and there's gonna be a great video that goes with that. And we also are delivering an album in July, that will be released end of February, right at the beginning of March next year. So the EP will carry us in the middle, and we'll be doing a bunch of shows to support that."

Last In Line deal with earMusic was revealed back in February, when Vinny Appice was a guest on Waste Some Time With Jason Green. Watch below

Since the inception of the band in 2011, when the original Dio band consisting of Vivian Campbell, Vinny Appice and Jimmy Bain rejoined forces along with esteemed vocalist Andrew Freeman to perform the classic Dio songs they originally wrote and recorded, the band has come a long way and taken a life of its own fueled by the support of the fans around the world.

Last In Line have overcome hardships with the unexpected passing of Jimmy Bain in 2016 and other various members changes, but have soldiered on along with renowned bassist Phil Soussan (Ozzy Osbourne) and have built this band into a heavy contender today.