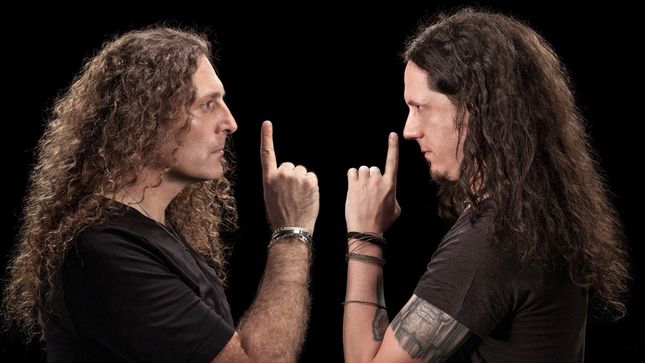 The self-titled debut album from Lione/Conti will be released on January 26th. The first video from the album, for the song "Ascension", is available for streaming below. Pre-order the album here.

Alessandro Conti is the voice of the Italian power metal band Trick Or Treat and in 2011 was tapped as the voice of Luca Turilli's Rhapsody (Ascending To Infinity and Prometheus).

Fabio Lione is the original and defining voice of Rhapsody, fronting the band from 1995 until his departure in 2016, having voiced all the band's albums to date, including the classics Legendary Tales, Symphony Of Enchanted Lands, and Dawn Of Victory. Lione is currently reunited with former Rhapsody members Luca Turilli, Patrice Guers and Alex Holzwarth on the Rhapsody Reunion tour. Fabio is also known for his work with Angra, Kamelot, and Eternal Idol.

Now, for the first time the two voices of the Rhapsody universe, and longtime friends, have joined together for the new project Lione/Conti, continuing the show the same power metal passion that has defined each vocalist's career. Teaming up with DGM guitarist/composer, and producer, Simone Mularoni who composed and produced the album, these songs have a heavier and definitive power metal vibe.

"I think that 'Ascension' is the perfect song to introduce the sound of this new project: great melodies and solo and a catchy refrain. It is the opener of the album, so for the first time people can hear me duet with Fabio. We also recorded a video for this one where we spent a day together with Fabio and Simone with a big green screen. When I saw the final result, I just said "WOW!!!" it's really impressive, I'm sure people will like it," says Conti about the song and video.

"I had a very good time in the studio with Simone Mularoni. We have known each other for years and there is a strong connection between us. So everything was cool, relaxed and fluent. Together we have finalized some vocal melodies and ideas and I think we did a great job in the studio. We spent 2 days together recording and thinking about ideas, and then Alessandro came into the studio to work on his parts. In general we are really happy about the result and the sound of the album," says Lione.

Mularoni adds, "It's been really challenging but also very rewarding writing songs for 2 singers like Fabio and Alessandro. But together we crafted a very inspired and fresh melodic album, with epic moments and also fast/in your face stuff! All the process was smooth and working with these great friends and professionals, it was really a blast."