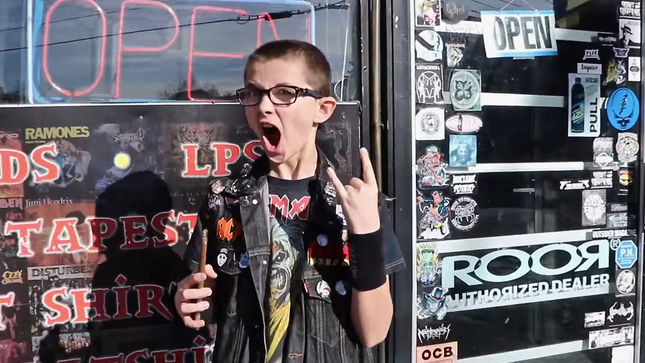 Elliott Fullam of Little Punk People visited fellow metalhead Stephen Keeler at his Rock Fantasy record store that he opened back in 1985. The store has specialized in heavy metal records, patches, shirts, blacklights. and more since he started the business in Middletown, NY. Over the years he has added different things to the shop in order to survive, including pinball machines, smoking devices, and he even had comic books for a little while. But the store was always primarily heavy metal.

Stephen had in-store appearances by Alice In Chains before they got big (which is mentioned in the video) as well as Death, Nuclear Assault, Exodus, Overkill, Skid Row, and many more over the years until there was no longer a venue for shows in his area, which makes it hard now to get bands to stop by. But he still carries plenty of metal vinyl and a lot of hard to find stuff to keep his store alive.

Stephen has a metal/rock-styled pinball room in his store in order to enhance his shop experience. And in the process over the years, he accumulated an insane collection of pinball machines and memorabilia which expands to his house, which Elliott also visited.

In the video below, take a look at the eye candy that is his collection which almost serves as a circus-like, heavy metal acid trip experience. Stephen had so much stuff that we could only cover a portion of it but you can clearly see the metal influence throughout.