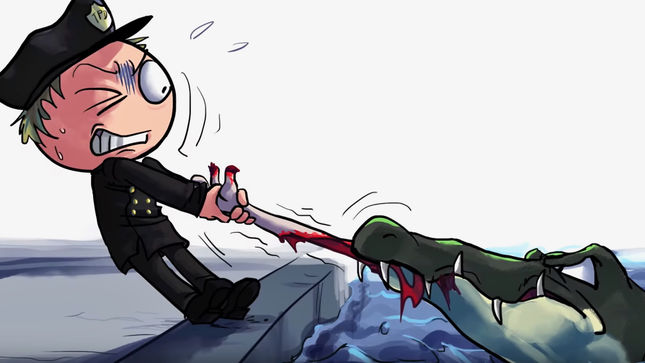 Macabre recently released their demented, heinous bloodbath of an album, Carnival Of Killers, via Nuclear Blast. Today, the band reveal the video for "Joe Ball Was His Name", which was created by Sweden’s Amanda Odenlid. Watch below.

Corporate Death comments, "Joe Ball was a serial killer called the Alligator Man. I started writing this song around our Grim Scary Tales era, but never actually finished it until getting things in place to record Carnival Of Killers. Reading more about him and his evil deeds from way back in the 1930’s I tried to give the song an old-time ragtime feel. I hope you like it, it’s a little different, but so are we."

Amanda Odenlid says: "I made the Macabre Minstrels videos just for fun, back when my interest in true crime had really taken off full force (thanks to discovering Macabre, actually). The "chibi"-style I used first saw the light of day when I started making a sort of tongue-in-cheek webcomic about Ted Bundy and Jeffrey Dahmer living together. I like the style because it is simple but expressive, and I also like the clash that occurs between the cartoony VS the grotesque and morbid. Having listened to Macabre for 10+ years has made me realize that, while morbid, there is also quite a lot of dark humor in their music as well. Kind of like my own art, in a way.

"As for this new video about Joe Ball; making it basically forced me out of an art-block I'd been having, also making me rediscover how fun it was to draw in this old chibi-style of mine. I went from only having heard of Ball's name somewhere, to almost knowing everything about him that there is to know (except his exact body-count). Despite the grim subject-matter, it was really fun to learn something new and to revisit my old passions for drawing and video-making!"

Carnival Of Killers was recorded and mixed by Tomek Spirala of Studio1134 with the exception of drum tracks as he recorded them at Kiwi Audio with the help of Mark Walker. The mastering of Carnival Of Killers was handled by J.F. Dagenais at JFD Studios in Dallas, TX. The “Where’s Waldo” meets serial killer album artwork was created by Corporate Death (lead singer | guitarist Lance Lencioni) and artist Laz Gein and highlights the album's most memorable references.

Order your copy of Carnival Of Killers in the format of your choice here. Save the album to Spotify, Apple Music and Deezer here.

"The Wheels On The Bug" video:

“Your Window Is Open” video:

"The Lake Of Fire" visualizer: