MEGADETH And The Birth Of The Rust In Peace Lineup; Rare Video Interview With DAVE MUSTAINE And DAVID ELLEFSON Surfaces 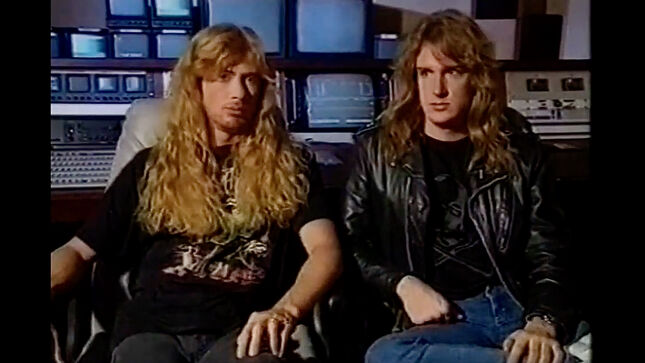 Menza Nation has shared the video below, along with the following message:

"ITV UK rock show, Raw Power, rare interview with Dave Mustaine and David Ellefson talking about tensions they had with Jeff Young and Chuck Behler, the birth of the Rust In Peace lineup and how grateful, and excited to have Nick Menza and Marty Friedman join the band for what would turn out to be Megadeth's most successful lineup to date."

The Clash Of The Titans tour began in the fall of 1990 with a three-week European leg featuring Megadeth, Slayer, Testament and Suicidal Tendencies, promoting their then-current albums Rust In Peace, Seasons In The Abyss, Souls Of Black and Lights...Camera...Revolution! respectively.

A second leg in 1991 in the United States and Canada had a slightly different lineup: Megadeth, Slayer and Anthrax headlined, and Alice In Chains supported; while Megadeth and Slayer were still promoting their respective albums Rust In Peace and Seasons In The Abyss, Anthrax was supporting their fifth studio album Persistence Of Time and Alice In Chains was touring behind their debut album, Facelift.

Alice In Chains was not originally on the bill for the US tour. According to the documentary Get Thrashed, Death Angel was to be the supporting act however, after a near-fatal tour bus crash, they were forced to bow out.

Sepultura was also mooted for the tour, but, according to then-frontman Max Cavalera, "got kicked out", and instead embarked on the New Titans On The Block tour with Sacred Reich, Napalm Death and Sick of It All.

Anthrax guitarist Scott Ian stated in an interview with Guitar World that they wanted Pantera as the opening act of the Clash Of The Titans tour. Other bands, such as Exodus, Vio-lence, Kreator and Obituary, also reportedly declined to take part in the tour as the opening act.

Menza Nation has shared a "micro-documentary" of the tour featuring a compilation of interviews and news reports. Check it out below.