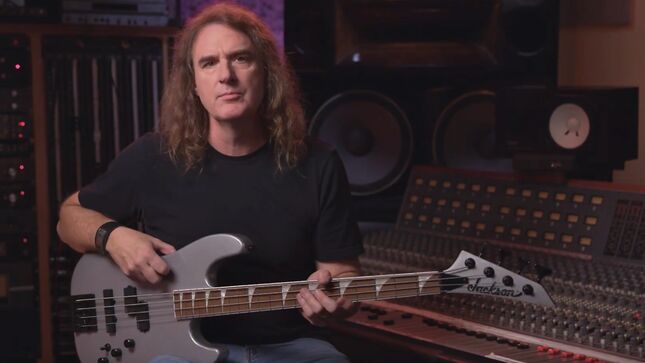 Megadeth bassist David Ellefson is featured in the clip below with Machine Head frontman Robb Flynn for part 2 of his NFR podcast interview. Ellefson shares stories of the early days of Megadeth rehearsing in a brewery, Paul Balloff of Exodus hanging at their apartment, his first Megadeth show at Ruthies Inn in Berkeley, his "Peace Sells... But Who's Buying?" bassline on MTV, their first tour with legends Motörhead, his slutty-era in the '80s and '90s, his years long battle with heroin and how he managed to work as a fully functioning drug addict, Dave Mustaine and Ellefson quitting heroin during the Rust In Peace album, and his incredible life turn around to being 29 year sober.

Ellefson has shared an exclusive sample from his upcoming fiction thriller novel, Rock Star Hitman, co-written with Drew Fortier. The book is available here. The two-page preview can be found here.

The description reads: The Sledge Chronicles: Rock Star Hitman is the first chapter in the action-packed saga of Sledge; an up and coming musician who uncovers a startling quid pro quo: in exchange for achieving his dreams of Rock stardom, he must enlist as a ruthless killer for a clandestine agency. Filled with twists, turns, screams, and even laughs, Rock Star Hitman is the cult thriller you've been dying for.

Ellefson states, “I've been on a quest to create an original thriller fiction book for some time now, and I’m beyond thrilled to announce it with Rock Star Hitman. I wanted there to be familiarity to my fans in an almost autobiographical way, but with characters and storyline which are clearly fictional. I think metal and horror/thriller fans are going to like it!”

Adds Fortier, “David and I clicked really well when creating this story, because we’ve both lived the rock n roll tale ourselves. That’s why Rock Star Hitman starts out like an autobiography from almost any musician, but then takes a sudden and unexpected turn into a world of suspense, dark humor, and bloody brutal situations. As a horror/thriller fan myself we could almost write ourselves into our own story line. Plus, I think most everyone will relate to the daunting tales of selling one’s soul for a rock n roll aspiration… a story that in and of itself is close to me as well.”

Ellefson and Fortier are no strangers to collaboration; on top of their forthcoming novel, they also have an independent, found-footage horror film due out in 2021. Titled Dwellers, the movie was written by, directed by, and stars Fortier, with Ellefson producing alongside Thom Hazaert via their Ellefson Films imprint.