MEGADETH Bassist DAVID ELLEFSON Looks Back On Writing "Dawn Patrol" For Rust In Peace - "As Soon As I Picked That Bass Up, The Riff Fell Out" 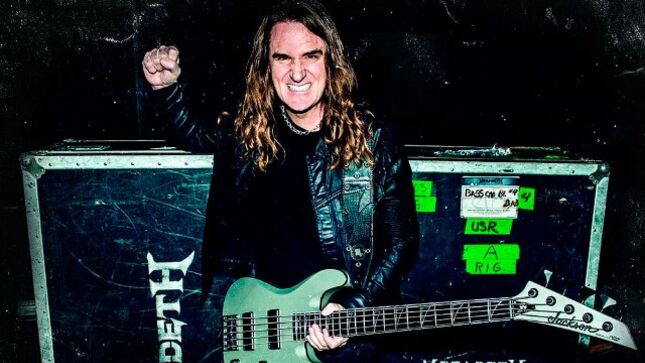 Speaking with Guitar World about what he believes are the best and worst albums of his extensive career, bassist David Ellefson looked back on Rust In Peace from 1990, calling it a "must have" album.

Ellefson: “The song 'Holy Wars... The Punishment Due' summarizes everything that Megadeth was about in 1990, and probably still does today – lyrically and musically. The engineer at Amigo Studios who helped us demo the first three tracks was Garth Richardson, and he came up with the half-time bassline in the middle section. That was clever, because the song doesn’t leave a lot of room for anything other than just to buckle up and play along with the guitar.

One of my other favorite bass lines on the album is in Five Magics, and for me, the crowning moment as a bass player is 'Dawn Patrol'. When we were in the studio, our producer Mike Clink kept asking us if we had another song to add to the record, and I had this bass line that I put down with Nick (Menza) on drums.

I borrowed an eight-string Yamaha bass from Dio’s bassist Jimmy Bain to write 'Dawn Patrol', and that’s where I first learned that an instrument can have a song in it. As soon as I picked that bass up, the riff fell out. I would never have come up with that riff on any other instrument. Rust In Peace definitely still stands up today. Megadeth’s fans tend to love it, for good reason.”

During a January 9th session of the Rock 'N' Roll Fantasy Camp Masterclass, Mustaine leaked the following information about Megadeth's forthcoming 16th studio album, which will be the follow-up to Dystopia, released in 2016.