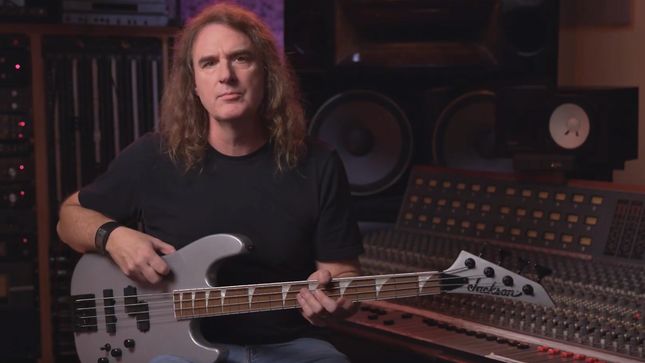 Ellefson, the eponymous solo band of Grammy-winning Megadeth bassist/co-founder David Ellefson, is gearing up to release  a new album entitled No Cover, featuring 17+ cover songs including classic tracks from Motörhead, W.A.S.P., Def Leppard, Cheap Trick, Queen, Judas Priest, Twisted Sister, Fastway, Fight, Dead Kennedys, and more, with cover art by Melody Myers (Ellefson, Altitudes and Attitude, Escape The Fate), an homage to the legendary Def Leppard debut, On Through The Night. The record is due to surface on November 20th.

Below is a teaser for Ellefson's cover of AC/DC's "Riff Raff", performed by David Ellefson (bass), Ron "Bumblefoot" Thal (guitars), Dave Lombardo (drums) and Jason McMaster (vocals), which was featured on More Nights With DE/TH. The video teaser can be seen starting at the 12:50 mark.

Produced by Ellefson and Hazaert, with guitarist Andy Martongelli, and engineers Alessio Garavello, Matt LaPlant (Nonpoint, Lil’ Jon, Skindred), and John Aquilino, and mixed by Alessio Garavello, Randy Burns, and more, Ellefson describes the process as a collaborative tribute, and a loving homage, to some of his favorite artists.

You can pre-order exclusive merchandise, experiences, and gear via Indiegogo here.

"Before any of us started writing our own songs, we all began playing cover songs by our heroes during our formative years as musicians. So, it’s fun to go back in time and revisit those songs which helped us to become the artists we are today, when, ironically, many of those artists have now become peers and friends.”

Ellefson continues, “A lot of our buddies have been playing covers and quarantine jams on the Internet during the pandemic, so this was really just an extension of that, but we took it the next level and actually recorded a full studio album. We’ve been working remotely anyway, as we’re all over the Globe, so it was easy to incorporate some guests jumping in with some outstanding performances of their own. It’s been a really fun nod to making great music with our friends, which is the whole reason we got into this in the first place!”

Says vocalist, and co-producer, Hazaert, “It’s all songs and artists that really mutually influenced both myself and David, especially a lot of early “Metal” and harder Classic Rock. Some stuff I picked, some stuff he picked, but for the most part is was all artists that we both loved."

He adds, “And we were able to work in a lot of nods to David’s history, getting Chuck Behler to play with us, bringing in original Megadeth guitarist Greg Handevidt to play on “Love Me Like A Reptile”, a song they used to play in cover bands together before they moved to LA (which we wrote about in More Life With Deth). These are literally all of my favorite bands, and as a vocalist, these are literally artists and songs I’ve covered all my life, so, it’s truly an honor to put together something so fun, and really as effortless as this was. It truly is a love letter to Rock N’ Roll.”