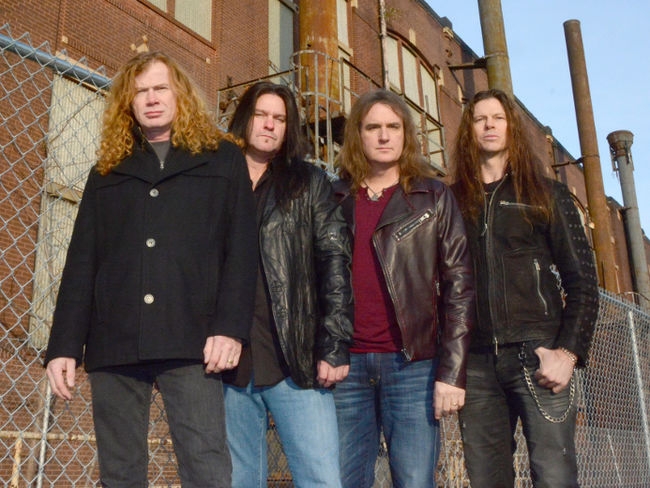 Nathan Taylor at the Orillia Packet & Times recently caught up with Megadeth bassist David Ellefson. An excerpt from the story is available below:

Addiction played a big part in the rifts and there were also legal disputes that followed the band’s 2002 split after lead singer and guitarist Dave Mustaine suffered an injury that sidelined him. While Mustaine reformed the band in 2004, Ellefson didn’t return to the lineup until 2010.

“With Dave and I, there was a very natural inclination and intuitiveness about what Megadeth should be. Probably the hardest thing in a band is being open to new ideas, but also fighting off those that become a distraction, which can pull a band apart,” Ellefson told The Packet & Times. “Megadeth has certainly had to weather those storms. That’s been its No. 1 obstacle — to keep its singleness of purpose, its focus and its vision and not being ripped apart by these tides that come in and can often just smash the house to pieces.”


The two Daves dismissed their differences for the sake of the musical monster they’d made, and they’re as close as they’ve ever been.

“We’re bandmates, but we’re also like brothers. Brothers agree and brothers disagree, but that’s what makes brotherhood so cool,” Ellefson said. “My brother just passed away this last month. Dave was a big brother to me in a way that, now, I need a big brother. It goes beyond just the two of us standing on stage, playing our guitars. While we do have a band to run and there is business to tend to ... there’s the human element, and without the human element, none of the rest of it happens.”


Go to this location for the complete story.

Megadeth's essential classic 1985 debut album, Killing Is My Business... And Business Is Good! has been re-issued on 180 gram heavy vinyl via Century Media Records. The album is available now - released on July 7th - in black vinyl, transparent red vinyl (limited to 500 copies worldwide) and transparent white vinyl (limited to 100 copies worldwide - exclusive to cmdistro.de). All vinyl versions are available now at CM Distro Europe via cmdistro.de.

Fuse TV continues with a new episode of Metalhead To Head... Megadeth's Chris Broderick and Dokken's George Lynch demonstrate their favorite picking techniques and more. Part 1 and 2 are available below. The duo get deep into their history in metal and their influences, with Lynch stating that he took in a lot of influences when he was younger through "osmosis"–simply by listening to his favorite bands and playing along to their records. Watch new episodes of Metalhead To Head every other Wednesday at 10 AM, PST / 1 PM, EST on FUSE.tv. View all the previous episodes here.