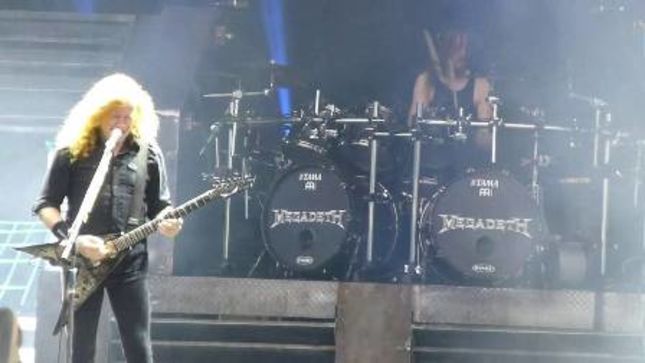 Megadeth were forced to cancel their August 20th show at the Jockey Club in Asuncion, Paraguay after swarms of fans crashed through the security gates protecting the stage in a stampede that left several injured. According to the report by Interaksyon.com, it had already been a rowdy concert at the Sport Colombia stadium in Asuncion, where vendors were selling alcoholic beverages in glass bottles -- which some fans hurled onto the stage, according to witnesses.

It came to an abrupt end when hundreds of fans broke through the security barricade, crushing several people and leaving them injured, according to police.

Megadeth frontman Dave Mustaine announced on Twitter that the band had called off the show with a series of Tweets:

"Dear Paraguay, after all three barricades broke and hundreds of fans crushed three security guards, almost killing one female fan, we regretfully had to cancel the show.

Please understand that your safety is just as important as ours and after all the security went in the pit someone ran onto the stage, a bottle was thrown, and we'll let you know as soon as we can reschedule and come back. Lo siento.

This is out of our hands and we will make sure when we return to use a different venue, security, and promoter. Again, Lo siento mucho."

The global Dystopia tour, which is currently in full swing, will have visited five continents by the end of 2016. Current tour dates are listed below:

In other news, Megadeth have released a video for "Post American World", from their latest album, Dystopia.