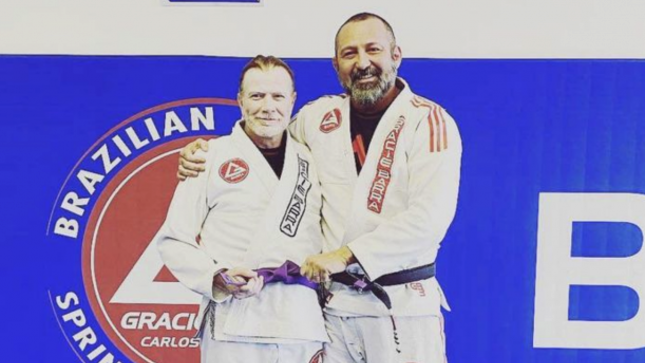 In lighter news for a change, Megadeth frontman Dave Mustaine has earned his purple belt in Brazilian Jiu-Jitsu at age 59. It was presented to him over the weekend.

Instructor Reggie Almeida comments: "After two years as a blue belt and hard training and lots of ups and downs, today I had the honor to promote Mr. Dave Mustaine to his well deserved purple belt! Congratulations kid!!!"

The purple belt is the intermediate adult ranking in Brazilian jiu-jitsu.

During a January 9th session of the Rock 'N' Roll Fantasy Camp Masterclass, Mustaine leaked the following information about his band's forthcoming 16th studio album, which will be the follow-up to Dystopia, released in 2016.

The new book Rust In Peace: The Inside Story Of The Megadeth Masterpiece, by Dave Mustaine with Joel Selvin, was released on September 8, 2020. It features a foreword by Slash, and stories from Mustaine, bassist David Ellefson, and former members of the band, among others. It details how Megadeth struggled with drug addiction, finances, and more, only to record one of the definitive albums of their career.