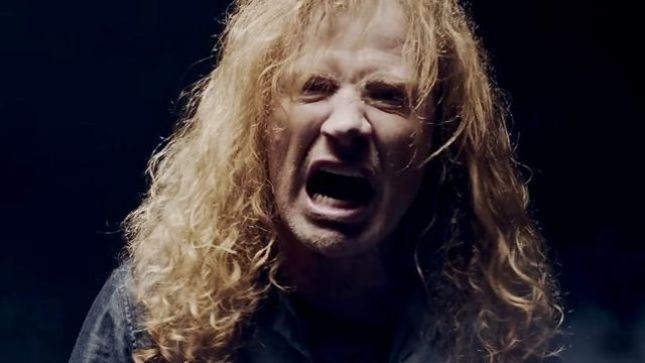 Megadeth frontman Dave Mustaine, who is currently undergoing treatment for throat cancer, posted a touching photo of himself and son Justis on Twitter. See below.

I wish I could relive the years I lost on the road. Also, those long goodbyes. pic.twitter.com/sf3ZQOLmKW


Guesting on the Appetite For Distortion podcast, Megadeth bassist David Ellefson discussed frontman Dave Mustaine's recent throat cancer diagnosis, saying "I definitely am optimistic about it. As Dave said in his press release, it's to be respected and met really head on and just right straight into it, which he's doing. So, I pray, and I lift it up to the higher power to have his hand on that. And in the meantime, take the next steps that are put in front of me, which, right now at this month and probably the next few months of my life, is the book (More Life With Deth) and the Sleeping Giants CD. And I guess it's kind of a cool thing because it keeps me occupied on something creative, something that's new for the fans. And I think it keeps kind of a creative mojo moving forward too even for the Megadeth fans that are watching all this happen right now as well. So, I'd like to think the good Lord kind of finds his time and his space, and all things kind of move forward as they're supposed to. But, yeah, I'm very hopeful and optimistic about Dave's recovery, for sure."

"I’ve been diagnosed with throat cancer. It’s clearly something to be respected and faced head on - but I’ve faced obstacles before. I’m working closely with my doctors, and we’ve mapped out a treatment plan which they feel has a 90% success rate. Treatment has already begun.

"Unfortunately, this requires that we cancel most shows this year. The 2019 Megacruise will happen, and the band will be a part of it in some form. All up to date information will be at megadeth.com as we get it. Megadeth will be back on the road ASAP.

"Meanwhile, Kiko, David, Dirk and I are in the studio, working on the follow up to Dystopia - which I can’t wait for everyone to hear.