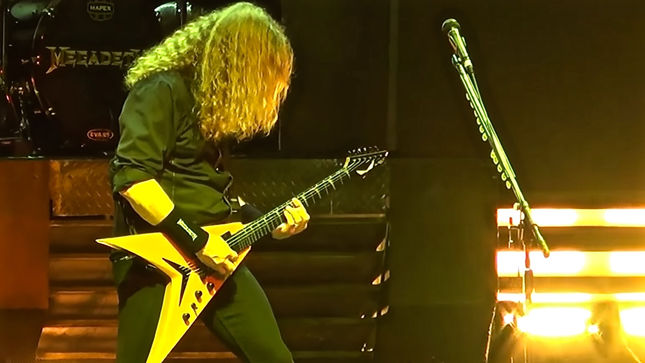 In a new interview with Reverb.com, Megadeth leader Dave Mustaine discusses his must-have equipment and the current state of metal music.

“You have no idea how many new Randy Rhoads there are out there or other fantastic talents that we’re not going to hear because they weren’t ready. I think the new musicians, a lot of them are good players, especially with the advent of technology for people to record and stuff like that, but there are also a lot of people who aren’t mature enough to get in a bus and leave their home for six weeks and ride around, slogging it out.”

Read the full interview at Reverb.com.

Mustaine recently announced the cancellation of all scheduled meet & greet sessions on the European leg of the band's Dystopia tour. The message can be viewed below:

Mustaine was interviewed by Red Carpet News TV at the Metal Hammer Golden Gods Awards in London, England. In the video clip below, he praises the late great Lemmy Kilmister of Motörhead, and reveals "another big tour in The States for five weeks with Amon Amarth, Metal Church, Havok, and one other band we haven't announced yet. Then we're going to take time off because our guitar player (Kiko Loureiro) is having twins!"

Although exact dates and venues for the Megadeth, Amon Amarth, Metal Church, and Havok trek through The States have not yet been confirmed, it's expected to begin sometime in September, quite possibly running into October.

Check out their complete live itinerary at this location.

Ron Ben-Tovim at Machine Music has contacted BraveWords with a report that Lamb Of God drummer Chris Adler is longer a part of the Megadeth line-up.

From Ben-Tovim:  "Chris Adler, of Lamb of God fame, is no longer a part of Megadeth, Dave Mustaine said during a news conference in Tel Aviv on Friday, ahead of the band's show in Israel on the following day. Meeting with journalists, Mustaine was asked by yours truly whether the way new members, like Adler and guitarist Kiko Loureiro, has changed at all since the band's inception. In response Mustaine stated emphatically that Adler was no longer in the band, calling him a 'session guy' and 'work for hire.' That last statement is especially jarring, since Adler has been, as far as the way the band has conducted itself in the press, been treated as a full member of the band, appearing in music videos and promo shots accompanying Megadeth latest release, Dystopia. Furthermore, while the band is currently touring with Soilwork drummer Dirk Verbeuren, Megadeth has repeatedly stated that Verbeuren, who was temporarily hired as a result of conflicting Lamb of God and Megadeth schedules, was only intended as a fill in until Adler's ultimate return."

Following is an excerpt from the Machine Music transcript of the press conference:

Machine Music: The band has its fair share of staff reshuffles along the way, a long-running band so it’s natural for that to happen, have you found that your attitude toward that, toward welcoming new people in, the consideration you take into who you want to join the band, has that changed over the years? With Chris and Kiko in the band, do you have other things in mind as to what you’re looking for? Personal chemistry, musical chemistry?

Mustaine: "If you’re in the presence of greatness, it’s shameful not to allow that to be great. But let me back up though: Chris Adler is not in Megadeth, he’s in Lamb of God. He was a session guy, he was what you could call work for hire. And he has nothing to do with us anymore, and he is with his band. I am very grateful for his contributions, I’m grateful for him introducing us to Dirk. We still haven't announced who our new drummer is going to be, it won’t be Chris Adler, because he’s in Lamb of God.

As far as having new guys in the band, as you grow up you have a choice either to learn from your mistakes or you’re destined to repeat them. And a lot of the things that I do, because of the nature of who I am, every move that I make is chronicled. There are a couple of websites in particular that would go under if it wasn’t for me, because they survive off of posting every breath I take."

Go to this location for the complete report and the transcript.