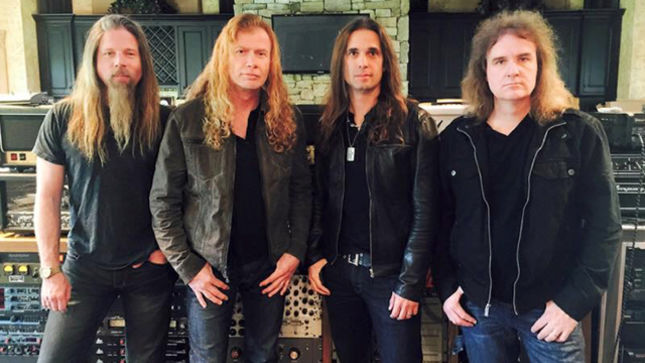 Justis Mustaine, the son of Megadeth founder/frontman Dave Mustaine, has posted a brief message on Facebook regarding the band's new album, which is currently under construction

Dave Mustaine will be in the Cyber Army chat room on Sunday, May 24th at 2:00pm EST. Fans interested in chatting with Mustaine should go to this location.

In his first extensive interview since his band’s lineup changes, leader Dave Mustaine speaks with Rolling Stone about all things Megadeth. He discusses the status and sound of the band's new album, what it's been like working with Lamb Of God drummer Chis Adler and Angra guitarist Kiko Loureiro, the Rust in Peace­-era lineup reunion efforts, his thoughts on a few of Megadeth's past members, and much more. A few excerpts follow:

Rolling Stone: How far along are you with the new record?

Dave Mustaine: “We have 15 tracks - 13 originals and two cover songs. We did "Melt The Ice Away" by Budgie and "Foreign Policy" by Fear. At this point, the drums are all done and Chris [Adler] is back home. Kiko finished all his rhythms and he's now doing solos. He's an amazing musician, very well-rounded. He did a lot of acoustic stuff, both steel-string and nylon-string, and he played a little piano at the end of a song called "Poisonous Shadows”. It's a really haunting piece, and the part that he played is very Chopin-meets-Megadeth, if that makes sense.”

R.S.: In addition to "Poisonous Shadows" are there any other song titles you can give us at this point?

D.M.: “There's a song called "The Emperor Has No Clothes," and another called "Tyranocide”. Several have working titles but I don't want to say what they are. After we write the lyrics they'll come. You know, when we did our first record out in Nashville [1997's Cryptic Writings] - and granted it was a different time back then, and a lot of stuff was different about who I am as a person - all the songs had working titles and they all had something to do with a genitalia reference and something satanic, like "Beelzebub's Ballbag" and "Devil's Sac”, stuff like that. And it was like, ‘Oh my god, you guys. I can't believe we're calling these songs this crap!’”

R.S.: Can you talk at all about the sound of the new Megadeth material?

D.M.: “Over the years we've always said, ‘We're going back to our roots’. But the naysayers, they just want Rust In Peace 20 times, which is never gonna happen. Because I've never written the same song twice. Unlike a lot of other rock and metal bands that, you know, they rely on a set formula, I try and make the songs all different. The funny thing, though, was that when Ellefson was doing the bass tracks I was telling him, ‘This is the “Tornado” [“Tornado Of Souls”] part’, ‘This is the “Bad Omen” part’, ‘This is the “Black Friday” part’, ‘This is the “Holy Wars” part.’ Because a lot of the things were in that kind of vein. Now, is it going back in time? Hell, I don't know. But I like what I'm hearing.”

R.S.: All that said, after Chris Broderick and Shawn Drover departed, you did make a real attempt to reunite the Rust In Peace-era lineup, with Marty Friedman and Nick Menza.

D.M.: “Yeah. And contrary to all the scuttlebutt that's going around, I wish those guys the best. But their recollections of the events that led up to it and happened after are considerably different from my recollection. But here's the thing - a lot of people, they either love or hate me. If I tell anybody what happened it's not gonna change the way they feel about me. But it'll probably change the way they feel about them. And I don't want to hurt anybody. All I can say I think they're both tremendous musicians and talented guys.”

R.S.: Is there a release date yet for the new album?

D.M.: We're hoping to get it out sometime in the latter part of the year. An interesting thing management told me is that, now, if you do a release at the end of the year it's not affected by the holidays because of all the digital downloads and stuff. My belief was always that when the holidays come around after Thanksgiving, radio shuts down and you start listening to "White Christmas" and crap like that. People go on vacation, and people like me that live to work have to be put on suicide watch."

Read this extensive interview in full at RollingStone.com.

Photos from the recording sessions of Megadeth’s upcoming album can be viewed below.

A brief video clip of drummer Chris Adler rehearsing a new Megadeth song (title unknown) in the studio recently surfaced; check it out below.

For their 15th album, Megadeth wants to bring you along for the ride. For the first time, the band is going to bring you into the process and give you a window into the world of Dave Mustaine, Kiko Loureiro, David Ellefson and Chris Adler. Pre-order the album digitally, on CD or on vinyl plus tons of other unique offerings like signed CDs, signed vinyl, gear from the studio and much more.

No matter what you order, you will get access to a variety of behind-the-scenes content such as photos and videos from the writing and recording sessions. You’ll get full access to the process in real time. Full details at this location.