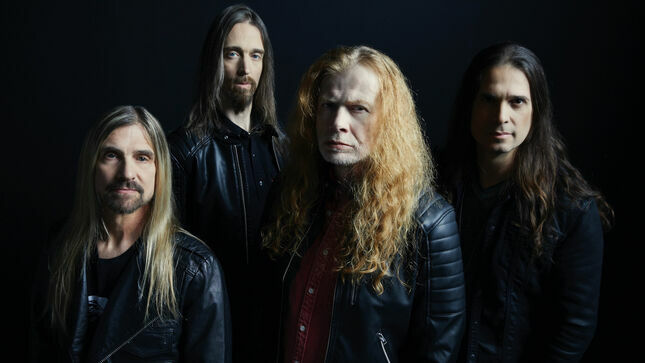 Megadeth's new album, The Sick, The Dying… And The Dead!, is out now. On August 25th, the band joined Eddie Trunk at the SiriusXM Garage Studio in Los Angeles, CA to discuss the album, answer  fan-submitted questions, and perform live.

Release day also marked the premiere of the latest video, "The Sick, The Dying... And The Dead!": Chapter III, the third and latest video instalment from their multi-part short film.

Creator Dave Mustaine, along with Producer Rafael Pensado and Director Leo Liberti, crafted together a story of the origins of Vic Rattlehead into the multi-part short film. "The Sick, The Dying… And The Dead!": Chapter III is the latest in the series that follows the saga of a war hero, now fully transformed into Vic Rattlehead, as he brutally exacts revenge and punishment on those who betrayed him and destroyed his loved ones and life. In this chapter, Vic continues to move up the chain of command as he torments his unsuspecting victim before dragging him down to eternal damnation in the land of the dead.

Watch all three videos below.

Featuring twelve new tracks, The Sick, The Dying… And The Dead! is available on CD, vinyl, and cassette, as well as digitally through all online partners and can be ordered/saved here. There is also be a limited deluxe edition 2LP, 12-track album pressed on 180g black vinyl, housed in a numbered gatefold jacket with a 12x24 lyrics/credits insert, a lenticular vinyl lithograph and a bonus 7" featuring "We’ll Be Back" and the unreleased b-side "The Conjuring" (Live).'The limited deluxe edition can only be purchased via Megadeth’s official online store, through Sound Of Vinyl, and uDiscover, and can be ordered here.

Featuring some of Dave Mustaine’s strongest songwriting while also incorporating writing from the rest of the band, The Sick, The Dying… And The Dead! brings together everything that’s exhilarating and distinctive about Megadeth. From the blistering throwback fury of "Night Stalkers" (featuring icon Ice-T) and first single "We’ll Be Back", to the more mid-tempo and melodic "Soldier On!", and the very personal title track, with its enthralling twists and turns.