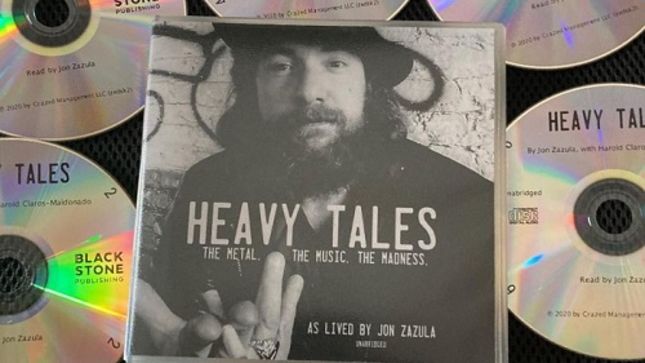 Heavy metal titan and founder of Megaforce Records / Crazed Management Jonny Zazula — best known in metal circles as Jonny Z — is tantamount for giving a voice and a platform to what was once an underserved and underrepresented musical community, reports Michele Amabile Angermiller of Variety.

One day, a demo by an unknown San Francisco band named Metallica came to the attention of Zazula, and a light bulb went off.

Zazula tells this tale — and more — in his autobiography, “Heavy Tales: The Music. The Madness. As Lived by Jon Zazula,” which was released in 2019 and is now available as a seven-CD collection, with the story told entirely in Zazula’s voice. The story follows the Zazulas early beginnings in the flea market and eventual expansion of the store and a once-in-a-lifetime moment of a fan bringing a demo of a band that would light fire to a musical movement that lasted a decade.

The book starts on a night when Megaforce Records should have been on top. Metallica had just released their second album, Ride The Lightning, with most of the material penned at the home of “Metal Joe” in Farmingdale, NJ.  The Zazulas organized a huge showcase at the Roseland Ballroom in New York City to celebrate, along with sets by Anthrax and Raven. The night took a bizarre turn when the original singer of Anthrax, Neil Turbin, abruptly quit after playing to the largest audience of the band’s career and Metallica left the next day to sign a deal with Elektra Records. The whole scene plays out like the opening of an epic film, and Zazula, who ironically named the label after a movie he saw titled Megaforce, intended it that way.

“That night was like the beginning of the end of the beginning. That was the big heartbreak, the big trauma, the big crescendo of it, all the super success out of nowhere. And then we were faced with, ‘What do we do? Do we sit there and die? Do we put our attention to Anthrax and Raven? And do we continue in the business that we didn’t know we were even in at the time yet?'” he said. “[Neil] walked out, I had Island Records there and they were whispering about a deal. And I had to face that. I had Metallica telling me that they were leaving me. I had to face that. And Atlantic records was there for Raven. So it was quite crazy — and right after that came the whole Megaforce Records deal with Atlantic Records.”

Learn more at this location. For more information on Heavy Tales: The Metal. The Music. The Madness. As Lived by Jon Zazula, visit jonzazula.com.