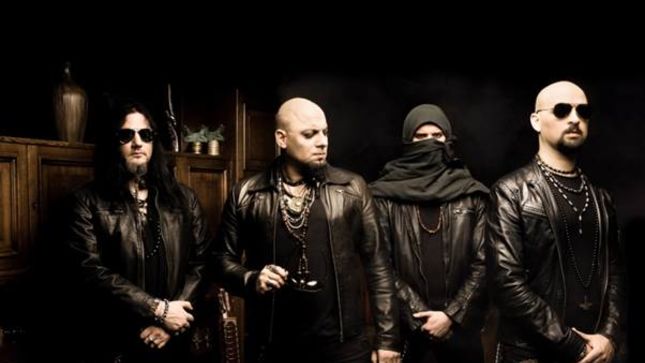 Commented mainman, singer and guitarist Ashmedi: "For the artwork we collaborated again with John Coulthart, who has done our previous two album covers. The art reflects the dynamics of the album and the world of Melechesh: order and chaos. It amalgamates several spiritual, cultural and mythological concepts from the Near/Middle East and our lyrical aspects. Again it was based in the golden ratio which for the purpose of this album seemed suitable.  The pillars featured here are a continuation from the previous album and lead to a path of knowledge. John always manages to capture the essence of Melechesh."

Furthermore, due to unforeseen productional issues, the release of Enki had to be pushed to February 27th (Europe), March 2nd (UK) and March 10th (North America), via Nuclear Blast Records.


Pre-order at this location.

Almost all of the music and lyrics was again written and produced by Ashmedi. Melechesh spent one month in their rehearsal room in Hinzweiler (Germany) rehearsing the material before entering the recording studio in Athens, Greece. The band wanted a Mediterranean place to capture the essence of the band’s origins.

Enki features 12 string electric guitars aside from the 6-string played on the entire album, for a heavier and subtly richer harmonic sound. The band also tuned their instruments to the pitch perfect 432 Hz frequency rather than the standardized 440 Hz one for a deeper sonic experience within the human psyche and in accordance to vibrations of the universe.

With so many nationalities in the band Melechesh have become more comfortable at being labelled as an act from planet earth or just Jerusalem without adhering to any man-made virtual borders. To the band this is metaphorical rebellion.

With this deep and personal album filled with metaphor, spiritual, and philosophical references,  and further development of their own Mesopotamian Metal, Melechesh are yet again ready to spread their sonic magic, enlightened revelations and art to the cosmos.