METALLICA Frontman JAMES HETFIELD On Daily Life During Pandemic - "I've Been Playing, Writing Kind Of Non-Stop, And Trying To Slow Down" 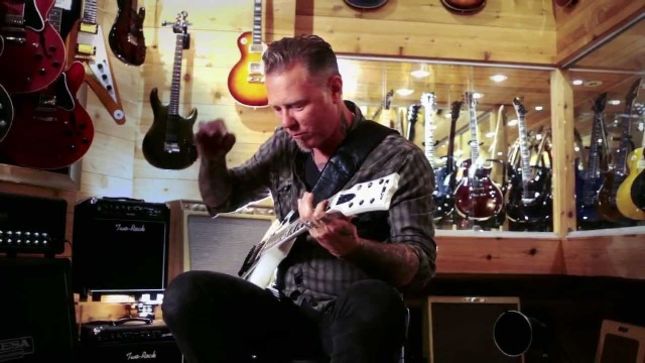 Metallica frontman James Hetfield is featured in a new interview with the band's fanclub, So What!. He reveals how he has been coping with quaratine during the Corona virus pandemic.

Hetfield: "I don't mean to sound cold about it, but for me personally, it's been really helpful to slow down, stop the work, stop the circus of what's going on with touring and band and all of that stuff, family struggles as well. So it's really good to have time to just be. To just be. Not have to have an agenda, but just to chill, to soak up life on life's terms, to plug into my community here in Colorado. That's definitely one thing that has been difficult for me to have because of coming and going every few weeks, not really being able to plug into any commitments or say, 'Hey, let's do this once a week,' or get together and barbecue, have a cigar pit or whatever, those weekly things that people get to do. I was not able to do those and now I am. I've built a really cool community of friends, true, unconditionally loving friends, and I would not have had that if I didn't have this time. But getting back into work, I've been playing, writing kind of non-stop, and trying to slow down and trying to have the other guys present some stuff that they would like to play in Metallica."

Go to this location to register for free and read the in-depth interview.

Communities across the west coast of The United States Of America are suffering. Metallica's All Within My Hands Foundation is donating $250,000 to assist in wildfire relief efforts.

Wildfires have become a cruel and unwelcome annual benchmark in California, and this year we have seen them tragically extend across the entire west coast of The United States. This is the fourth consecutive year, dating back to the formation of the Foundation, that All Within My Hands has activated to support fire relief: the critical local services component of our mission.

Metallica would like to encourage you to join us in supporting those in need and our first responders in any way you can by donating money, non-perishable food, clothing and other supplies, or by giving your time volunteering or providing safe, temporary housing. Every little bit helps.